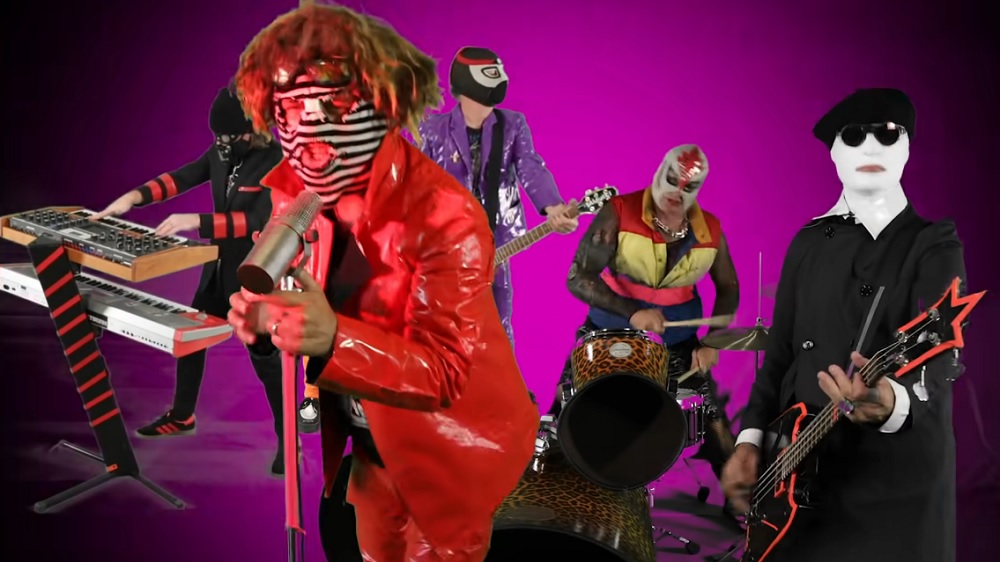 The Network is the New Wave-inspired side project from Billie Joe Armstrong, Tre Cool and Mike Dirnt of Green Day — though they won’t admit that outright.

For years, the Rock and Roll Hall of Fame punk trio has maintained a playful “no, that’s not us!” mantra regarding the project, which released its only album, Money Money 2020, in 2003 on Adeline Records (which happened to be founded by Armstrong).

The Network hadn’t been seen or heard from in quite some time, but this week some teases were shared on social media hinting at a comeback … which is precisely what’s happened.

The Network were formed in the year 2003, fulfilling an ancient prophecy predicting that we, its chosen members, would issue a stern warning to mankind in the form of music. Released as the album titled Money Money 2020 we shined the headlights upon the follies and vanity of man kind. Rapidly achieving fame and fortune, we had often been mistaken as the planets greatest rock ‘n’ roll band Green Day. This earthly comparison is almost as comical as the humans that inhabit this dying planet! A Time Machine & The Church of Lushotology… After our mercurial rise and the foundation of the Church of Lushotology. We have seen riches beyond imagination, thus we abandoned the doldrums of stardom and focused our efforts on time travel and the salvation of things beyond the human grasp! Within our travels through both time and space we have seen the futures foretold in the prophecy, and it is both disastrous and hilarious! Beyond these interstellar crossroads lie parallel dimensions where the oxymorons can create their own destiny! Choose wisely, for the devolution of man has always been a choice. The release of “Money Money 2020 Part II" will serve as the final lesson! Within the binary codes of this album exist the keys to our past, present, and future DNA! The Gods are laughing & it’s up to you to prove them wrong… You're welcome… The Network The Church of Lushotology is in session and it’s time to drink up!


In addition to the social media posts, The Network shared a full music video for a song called … wait for it … “Ivankka is a Nazi.” The video depicts the members of the band — whoever they may be — in full masked regalia, and the whole thing is really irreverent:

Here’s a look at the theories behind the identities of the Network, per Alt Press:

It’s believed that Armstrong is actually the Network’s frontman “Fink” while Dint is “Van Gough” and Tre Cool is “The Snoo.” As well, it’s also rumored that frequent Green Day collaborators Jason White and Jason Freese play in the band as guitarist “Captain Underpants” and keyboardist “Z.”


Alt Press also notes that the new song is part of a project titled Money Money 2020 Part II, implying that there’s a new album on the way. Stay tuned!

Armstrong and his pals have kept pretty busy this past year, even through the COVID-19 pandemic that saw Green Day’s anticipated Hella Mega tour with Fall Out Boy and Weezer rescheduled to Summer 2021.

Suddenly stuck at home during quarantine, Armstrong began a #NoFunMondays series of covers, and compiled them for a new album due out on Nov. 27: