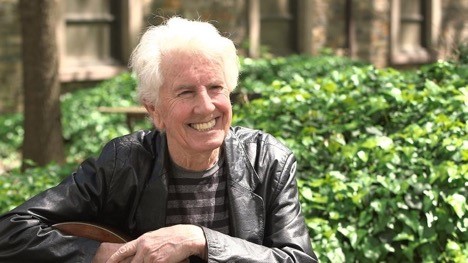 Legendary singer/songwriter Graham Nash has found a way to keep busy while at home during the COVID-19 pandemic — writing songs!

Apparently, he’s penned “half an album of new song demos,” as he told Anthony Mason of CBS Sunday Morning in a new interview segment that is scheduled to air this Sunday, May 17 at 9:00 a.m. ET on CBS.

“It’s not been too weird for me,” Graham tells Mason of being socially isolated. “I’m, I’m not a very social creature. I, I like to stay in my apartment. I like to be making music. … I’m doing demos. I’ve got half an album already done.”

The interview was conducted in the garden at St. Mark’s Church in New York City, with both participants maintaining social distance, of course.

Graham Nash was out on tour when the pandemic forced everybody inside and, subsequently, brought an abrupt end to his tour:

“And, unfortunately, you know, it was getting crazy,” Nash says. “I was definitely concerned about my audience and my crew and – myself, you know? So yes, very strange times.”

From home, Nash participated in Rolling Stone‘s In My Room sessions:

For what it’s worth, Nash doesn’t see the possibility of live concerts (which have been the focus of many conversations lately) until 2021:

“Obviously, I love to perform. I love to communicate,” he says. “But quite frankly I don’t see that happening until 2021. That’s almost another year away.”