The Goo Goo Dolls are out on the road celebrating the release of their 13th album, Chaos in Bloom, this past Friday, Aug. 12 — but John Rzeznik and Robby Takac have also reached another major milestone in a career full of them.

“Iris,” originally released in 1998 as a single from the band’s smash-hit album Dizzy Up the Girl, recently eclipsed 1,000,000,000 streams on Spotify. That’s one billion, if you got lost in the zeroes.

In addition to featuring on Dizzy Up the Girl, “Iris” was also on the soundtrack to the Nicolas Cage/Meg Ryan film City of Angels, which boosted its popularity tenfold. Here’s the now-classic video for the song, which itself has more than 370,000,000 views on YouTube:

The song was also all over MTV’s TRL — here’s a wonderfully warbled VHS transfer of host Carson Daly introducing an in-studio performance of the song from back in the day — representative of how strong the song’s hold was over the pop culture climate of the era:

And a Letterman performance from 1998:

It’s a song that won’t die, and remains the most successful, enduring classic of the Goo Goo Dolls’ reputable repertoire.

As for Chaos in Bloom, it’s the 13th album from the alt/pop-rock band, and finds them “in the zone,” so to speak. The first Goo Goo Dolls record to be produced by Rzeznik, it was led by the single “Yeah, I Like You,” and its video taking aim at “celebrity culture”:

“In a world that is just drowning in social media and internet stars, many of whom are certainly talented, but many confirm that in 2022 you can be famous for doing nothing,” he said in a statement. “Celebrity in this age has a very quick burn. It was hard not to be consumed by it during the pandemic.”

The album’s back story, per a news release:

To record the album, Rzeznik and Takac retreated to Dreamland Studios just outside Woodstock, New York during the pandemic. An environment as remote as it is rich with historic rock music roots, the location proved to be the perfect setting for clearing the noise and creating such a record, which carries a true live quality that the band captured by blending vintage instruments and gear with new-age recording processes and techniques.

While Rzeznik is the band’s “lead singer,” Takac takes up lead vocal duties every now and then, at least once on each album. On Chaos in Bloom, he powers through one of the album’s strongest tracks, the shimmery, power-pop gem “Loving Life,” his slightly raspy voice a complement to Rzeznik’s, which has become synonymous with the Goo Goos’ many, many FM radio hits.

Simply put, Chaos in Bloom is an especially solid late-era release from the Goo Goo Dolls, one of the most successful pop/rock bands of the past 3+ decades. Sure, their commercial peak may have reached it apex in the mid-to-late ’90s with “Name,” “Iris,” “Slide,” “Black Balloon” and several other hits, but they’re still pumping out earnest anthems with sweeping hooks and that boundless energy, not to mention Rzeznik’s knack for sardonic, thoughtful lyrical phrases that hold the mirror up to our shared experience.

Yeah, I Like You
War
Save Me From Myself
Let The Sun
Loving Life
Going Crazy
Day After Day
Past Mistakes
You Are The Answer
Superstar

Catch the Goo Goo Dolls on the road with special guests Blue October. Of course, you can expect “Iris,” “Slide,” “Broadway,” “Name” and several more of the band’s hits — as well as a selection of Chaos in Bloom tracks. 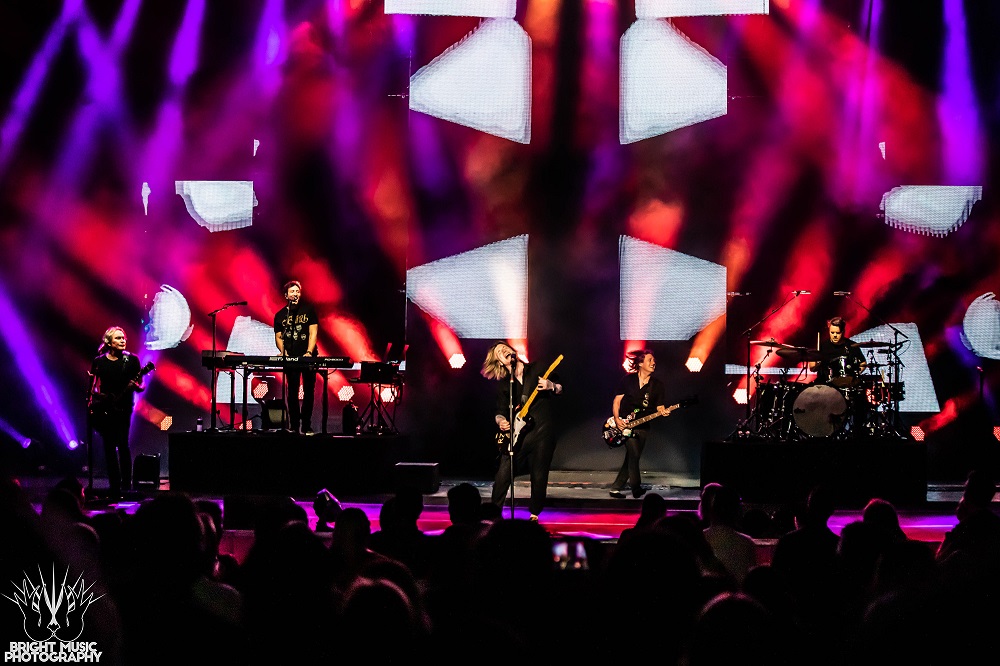