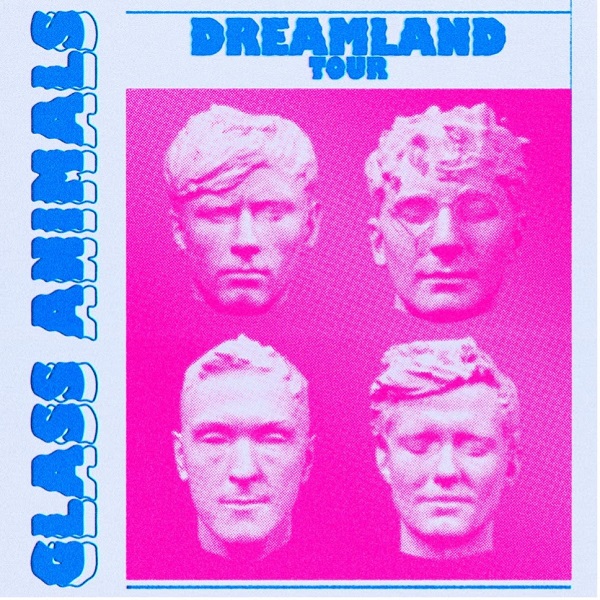 English indie/pop band Glass Animals will embark on a North American run of dates this fall on the Dreamland Tour, named after the group’s 2020 album Dreamland.

The third official album from the band, Dreamland was a genre-crossing breakthrough for Glass Animals, led by the song “Heat Waves,” which racked up hundreds of millions of streams, extensive radio play and helped the group become a household name in the indie realm:

A bit more about the song’s success, per a news release:

“Heat Waves” peaked at #1 on the Alternative Radio Chart for 3 consecutive weeks, a first for Glass Animals in their career. The track currently sits in the Top 20 on the Top 40 Radio Chart and is making similar moves at Hot AC and AAA. “Heat Waves” held the #1 spot on the ARIA Official Singles Chart in Australia for six consecutive weeks, marking the band’s first #1 single globally and in their release history. Last week, it hit a new peak on Spotify’s Global Top 50 Chart at #25. With over 2.5 million global adjusted single sales, the song has amassed 2 million daily streams and received 16 million views of the video on YouTube. Glass Animals recently hit a new Spotify monthly listener peak of 17.2 million, surpassing the likes of Tame Impala, Gorillaz, The 1975 and The Strokes.

right then, here we go! switch the lights back on N.America 💡
DREAMLAND 2021 / 2022 tour is ON
tix on sale 10am local time this thursdayhttps://t.co/qNInhO95KB pic.twitter.com/IdhDLxzWho

Click here to pick up Dreamland from our Rock Cellar Store

And the Dreamland tour dates, which include some notable venues and music festivals (including San Francisco’s Outside Lands Music & Arts Festival on Halloween weekend):