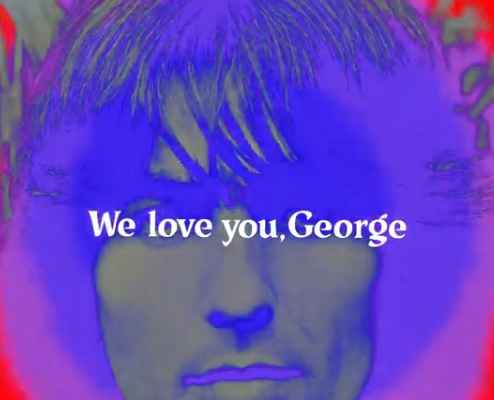 As is always the case every time this date comes around each year, Harrison‘s Beatles band mates paid tribute to their late colleague and friend with heartfelt social media messages.

Hard to believe that we lost George 20 years ago. I miss my friend so much. Love Paul.

Hard to believe that we lost George 20 years ago. I miss my friend so much. Love Paul. pic.twitter.com/EnCBAV4Zzn

The estate of John Lennon, meanwhile, put together a playlist of relevant songs between the two:

🕉️GEORGE HARRISON.
Listen To This Playlist and celebrate the love and life of @GeorgeHarrison and his collaborations with John.
🎧 → https://t.co/VivbdvKUg2 pic.twitter.com/KGSfqARVeN

This attention on Harrison and the Beatles comes during a particularly noteworthy time, of course. Just last Thursday, director Peter Jackson’s highly anticipated The Beatles: Get Back documentary series premiered on Disney+, a six-hour production focusing rather intimately on the process behind the group’s 1970 album (and all of the drama associated with that era).

Rock Cellar has behind-the-scenes features and interviews with the people who worked on it, and who were there. https://t.co/W0o4k6vqrq https://t.co/IYB1anycGn pic.twitter.com/allqf9wQcl

In connection with the documentary series, Rock Cellar’s Ken Sharp spoke with Kevin Harrington, a Beatles equipment manager/roadie during that time, for some personal reflections about what it was like being around the Beatles’ inner circle at that era.

Rock Cellar: Being in attendance for all of the Let It Be recording and film sessions, upon seeing the original Let It Be film, how closely did it match the vibe of those sessions? Or do you think it was a darker representation?

Kevin Harrington: First, I thought it was a darker representation. It seemed to be more focused on them having issues with each other, when in reality I remember lots of laughter. The argument caught on camera between Paul and George wasn’t a big deal. It’s just one of those arguments. There was a lot more laughter. Listen, I’ve worked with so many acts in the studio and in rehearsal rooms and worked with so many people, they were just another band having an off day.

I believe with the six-hour new Disney documentary that’s coming out you’re going to see the real fun of what it was like working for the Beatles.