Home / Dave Grohl and the Foo Fighters Have the Hilarious Cure for Crippling Coffee Addiction: ‘FreshPotix’

Dave Grohl and the Foo Fighters Have the Hilarious Cure for Crippling Coffee Addiction: ‘FreshPotix’ 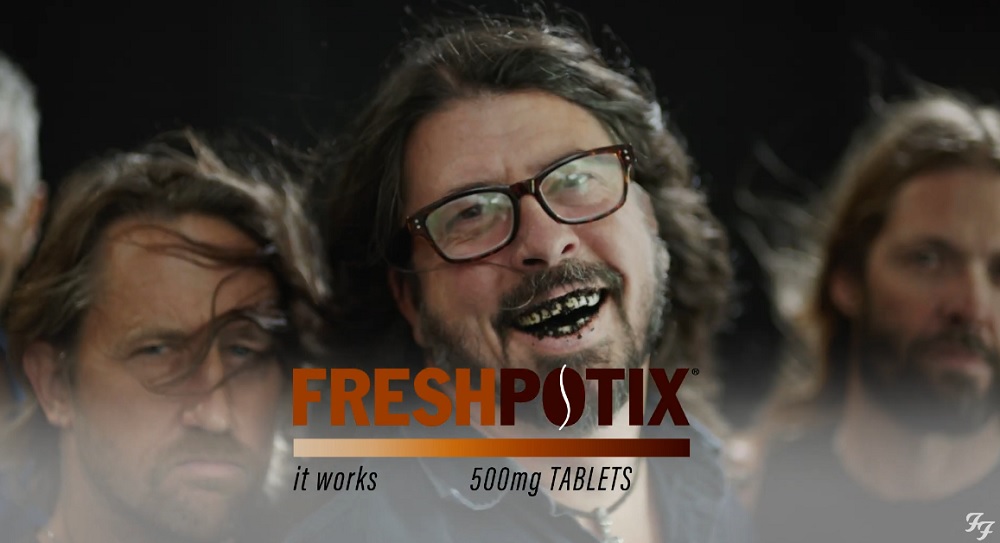 Do you like coffee? Are you incapable of starting your day without downing an entire scalding hot carafe? If your addiction to “fresh pots” has you looking for an answer, Dave Grohl and the Foo Fighters have a product for you: FreshPotix, the cure to what ails you.

The band shared a goofy spoof video on Wednesday that plays like a pharmaceutical advertisement for a made-up product … in this case, FreshPotix, meant to aid those with a crippling addiction to coffee.

If this all seems bizarrely random to you after reading the above, well, there’s some important context here. A decade ago, Grohl starred in the video below, which came during the promotional campaign for his Them Crooked Vultures project with Josh Homme of Queens of the Stone Age and Led Zeppelin‘s John Paul Jones:

“Ten years ago, I was in the grips of a debilitating caffeine addiction. My ability to maintain personal relationships and solid bowel movements were compromised by crippling sleep depravation and noxious coffee breath. As the bean took over, I found myself doing anything for a fix. My roast grew darker and darker — until I finally hit pot bottom.”

Well, he’s stumbled upon the cure now, in the form of FreshPotix. Note, however, that this fancy cure-all does come with a laundry list of absurd side effects:

Grohl’s real-life coffee habit actually DID land him in the hospital, believe it or not. As he explained in a podcast (summed up by Alternative Nation):

Grohl: I come home and I call my doctor and I’m like: “Mel, I’m having chest pains” and he’s like: “are you having them right now?” I said: “kinda” and he told me to come in here [his office]. I go in there and I’m full six million dollar man, all the things on me, an EKG.

Grohl: Anyways, so, he’s like: “you look fine but I think you should get a CAT scan”. So, I’m going to get a CAT scan and the doctor takes one look at the CAT scan and goes: “how old are you?” and I said: “I’m forty” because I had just turned forty so I assumed I was going to die soon, He was like: “Your heart is fine but are you under any stress?” I’m like, yeah a little bit.” The doctor asked if I got enough sleep and I was like, “Nah”, asked if I drank a lot of coffee and I said: “yeah…”

Host: Depends on what you mean by a lot!

Grohl: The doctor basically said to play drums three days a week and have a glass of red wine and you’ll be fine.

Host: Did he tell you to cut down on your coffee consumption?

Grohl: Yeah and, I tried to decaffeinate.

This FreshPotix stunt comes as Grohl and the Foo Fighters have kept pretty busy in recent weeks. They performed an intimate, acoustic concert at the Troubadour in West Hollywood as part of the #SaveOurStages virtual festival earlier this month:

They also lent their services to the Tom Petty 70th Birthday Bash last week and unearthed a 1996 radio gig that featured a glorious performance of “Wattershed,” with Grohl singing as Fred Schneider of the B-52’s: