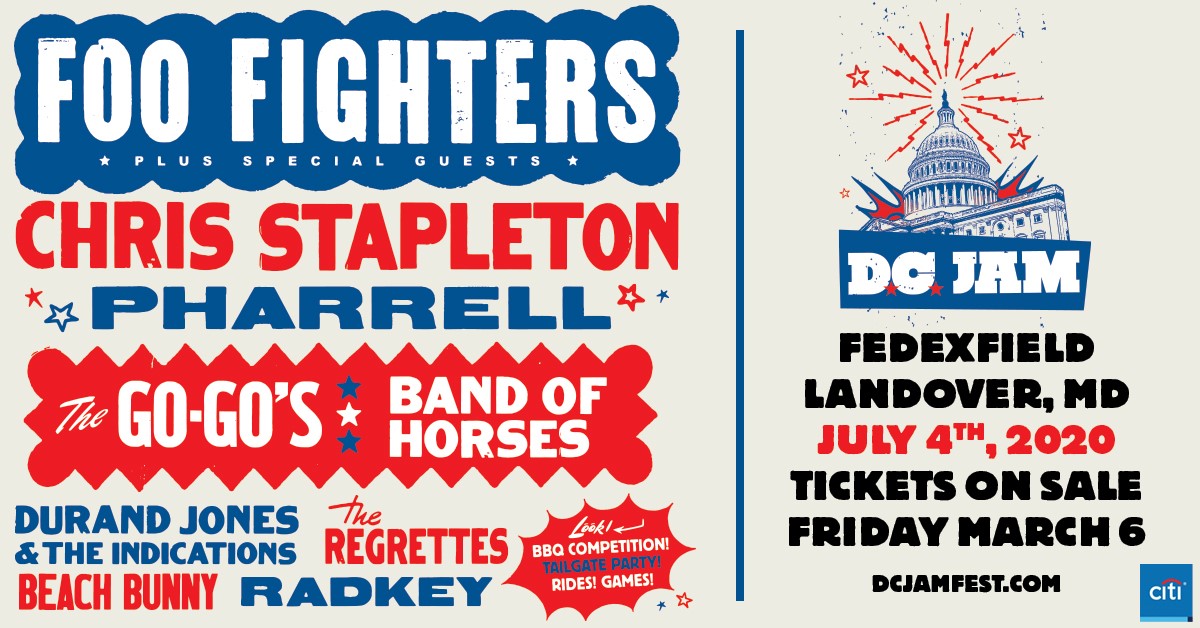 And this July 4, Dave Grohl and his pals will commemorate the 25th anniversary of the band’s self-titled 1995 debut record (which was all Grohl, all the time, really) with D.C. Jam, an all-day rockstravaganza at FedExField.

As detailed on Tuesday, this will be a balls-to-the-wall party featuring an eclectic mix of artists across the musical spectrum, including:

This is the first Foo-curated mega-fest since Cal Jam in 2018, which was quite a spectacle.

D.C. Jam is a sequel of sorts, with this from the festival’s website laying it out plainly:

After two years and 70,000+ served, Foo Fighters are bringing the JAM back from CAL to D.C.: This July 4, consider yourself Foo-rmally invited to an all-day all-night celebration of the 25th birthday of that first album that started it all—all at FedExField in Dave Grohl’s formative stomping ground.

That’s right, that Grohl one-man-band-demo-turned-platinum-debut-album came into this world July 4, 1995. And now 10 albums, no less than a dozen GRAMMYs and countless trips around the arena, stadium and festival stages of the world later, it’s time to join Dave Grohl, Nate Mendel, Taylor Hawkins, Pat Smear, Chris Shiflett and Rami Jaffee in commemorating that milestone.

But, in typical Foo fashion, D.C. Jam won’t just be about the music. Via a news release:

Foo Fighters and the festival organizers are of course cognizant of the fact that everyone needs an occasional reprieve from the rock, and as such D.C. JAM will feature side attractions including a BBQ Competition, a Tailgate Party, Rides, Games and more to be added and announced as the date nears.

D.C. Jam comes after the band unveiled a special 25th anniversary tour — and don’t forget, a new record is also in the works. Busy times for the Foos!

D.C. is a very important spot in Foo Fighters history. After all, Grohl was born in nearby Virginia, and much of his formative years as a musician were spent roaming D.C.’s vaunted club scene in the 1980s. D.C. was also the site of the Foo Fighters’ 20th anniversary blowout back in 2015, staged at RFK Stadium.

As for ticket details for D.C. Jam:

Citi is the official presale credit card of D.C Jam. As such, Citi cardmembers will have access to purchase presale tickets beginning Tuesday, March 3 at 12pm ET through Citi Entertainment®. For complete presale details visit www.citientertainment.com.

Tickets will go on sale to the public beginning Friday, March 6 at 10am ET. For pre-sales and other information, go to DCJamFest.com