Flannel Nation has been cancelled, organizers shared in a message on Facebook on Tuesday after several bands, among them Everclear, Candlebox and Filter, announced that they had dropped off the planned event.

We regret to announce that due to ongoing problems and logistical setbacks, putting on Flannel Nation as intended has…

The appropriately named Flannel Nation Festival: A Celebration of the 90s will roll into San Pedro, Calif., this coming Saturday, Aug. 13, featuring performances from several nostalgic alt/rock bands who hit it big at various points in and around the 1990s. 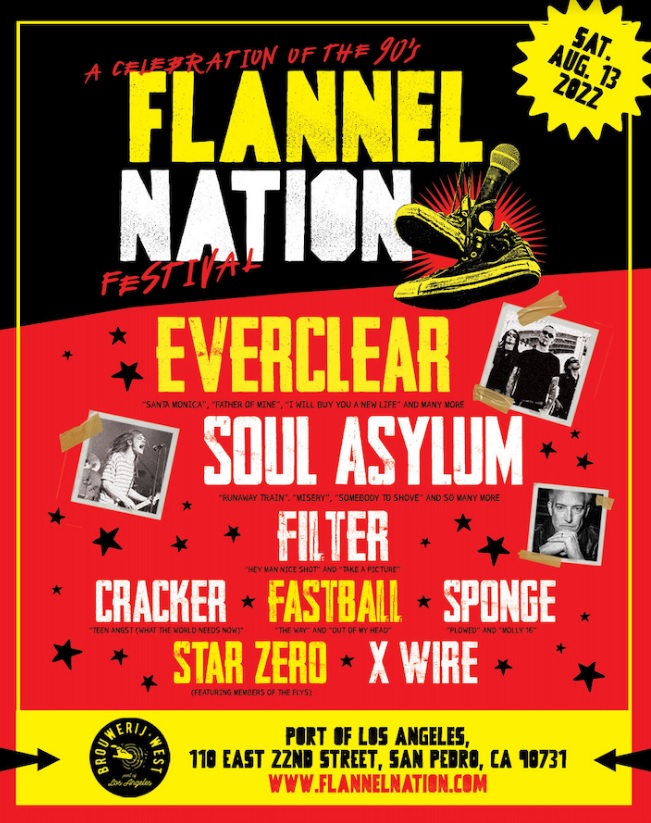 The location of the event has changed since it was first announced; Flannel Nation will now take place at BROUWERIJ WEST Craft Brewery & Beer Garden (110 East 22nd Street, San Pedro, CA), adjacent to its original location within the Port of Los Angeles.

More on the fest, per a news release:

The ‘80s were neon and big hair; then the styles changed and the music changed with it. Flannel and long hair came into play and the world saw the rise of bands like Alice in Chains and Stone Temple Pilots. But along with the Seattle scene, there was a plethora of bands that broke style molds like the fuzz guitar of FILTER, the poppy hooks of Soul Asylum, Sponge, Everclear, and many more. This summer, we bring the ‘90s to SoCal: on the water, in the Port of Los Angeles, with a 12-acre space and the Lane Victory battleship parked on site!!!

Join us for a day of live music with some of the era’s top bands, tons of delicious food trucks, craft beer, full bar, and lots of retail vendors for shopping.

Tickets for Flannel Nation Fest are available at this link.