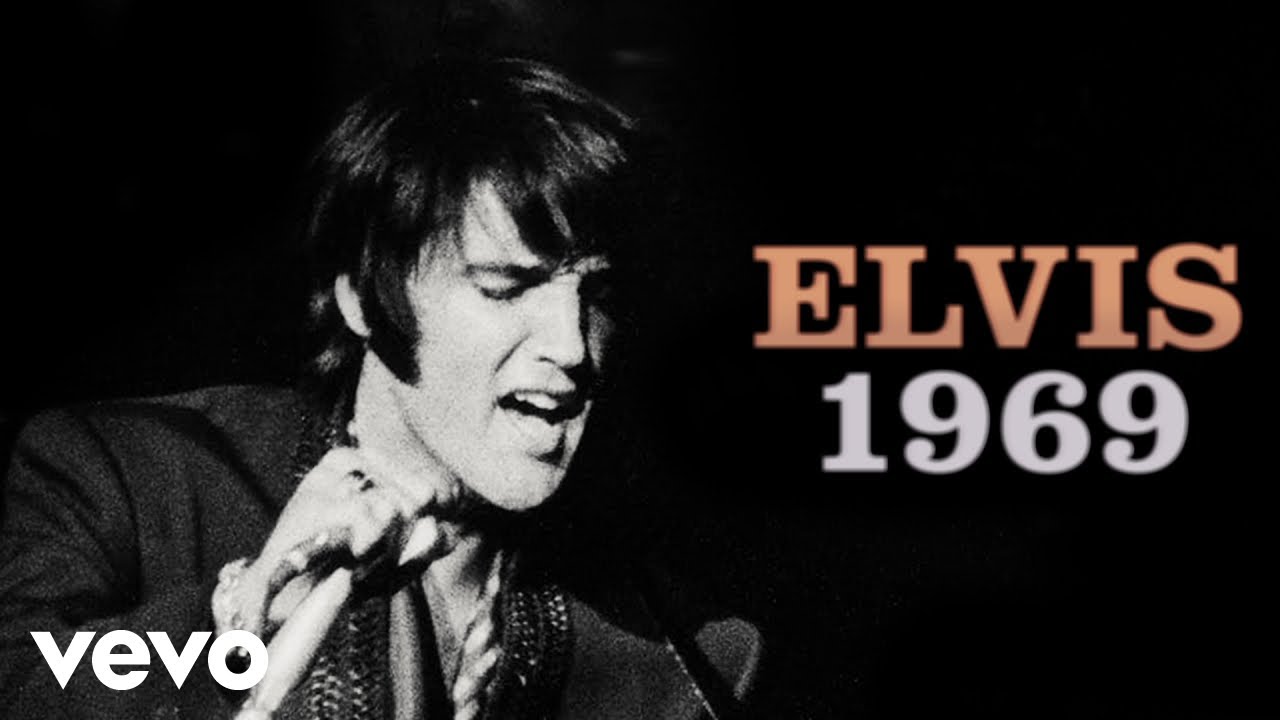 2019 marks the 50th anniversary of Elvis Presley’s triumphant 1969 return to live performance with a sold-out engagement at the newly opened International Hotel in Las Vegas. The newly released Sony Music 11-CD box set, Elvis: Live 1969 (pick up a copy here) showcases 11 complete concerts that lend powerful testament to the enduring magic of Elvis Presley live in concert and what made him the world’s most explosive, charismatic and dynamic performer around.

Energized by the galvanizing global success of 1968’s Singer Presents … Elvis NBC TV special, Elvis was primed and ready for a long-awaited return to the concert stage. Yet for Elvis, it was still a mighty gamble, as Vegas was the same town that treated him like an alien from a traveling freak show during his ill-fated 1956 appearances at The New Frontier Hotel. Elvis knew what was on the line and was understandably nervous about how he’d be received.

“He tried to crack Vegas in the ‘50s and they weren’t ready for rock and roll then,” relates Tom Jones. “So he always wanted to go back to Vegas and become a success there.” And just like any obstacle in his career, when he put his mind to it Elvis summoned the fortitude, determination and courage and rose to the challenge — and karate-chopped it into oblivion.

In 1969, his highly anticipated shows at the newly opened International Hotel — 57 shows in total — were the talk of the town, drawing fans from around the world and racking up record sell-outs in the process. In an interview filmed for the 1972 documentary, Elvis spoke about assembling the band:  “I wanted musicians who could play any kind of music. All of the musicians are all handpicked. I auditioned musicians for days and days, drummers and guitar players. I said, “Who’s the best guitar player around?” And they said, “Glen Campbell and James Burton.” I said, “Well, Campbell’s out, he’s on his own so James Burton.”

There’s a lot of good men around me, it was just a matter of finding them. They all just fit in, and fortunately they knew most of my songs. I wanted voices behind me to help add to the fullness of the sound and dynamics of the show.” Backed by the TCB band, which included guitarists James Burton and John Wilkinson, bassist Jerry Scheff, drummer Ronnie Tutt and keyboardist Larry Muhoberac, his expansive sound was augmented by not one but two vocal groups, the Sweet Inspirations and The Imperials, each disparate in styles and sensibilities, but somehow coalescing into a weighty stew of gospel, soul, R&B and country. The addition of Bobby Morris & his orchestra helped broaden the sound into a huge cinemascope sized production.

TCB Band pianist Larry Muhoberac remembered the rehearsals as being “ … fun but pressurized. But things went smoothly. No hassles, no arguments. We were focusing on the music, refining it and getting the songs into shape. I could tell Elvis got a kick out of doing his early Sun songs like ‘Mystery Train.’ Everybody was behind him. We wanted it to work for him so badly. Elvis would ask, ‘Hey, do you know this or do you know that?’ and he’d play a little of it on guitar. Everybody already knew most of the songs, and if someone didn’t remember how it went you’d pick it up by ear. Everybody had that kind of ear where they could pick up songs quickly. They were used to playing a lot of styles. All the members of the band were very versatile, which worked with the type of music Elvis was doing.”

On July 31, 1969, inside a packed International Hotel showroom, 2,000 fans, celebrities, dignitaries and high rollers witnessed Elvis’ electrifying debut performance, marking his first live shows in eight years. His tour-de-force performance was heralded as a shining artistic triumph with Rolling Stone, Newsweek and the New York Times lavishing mighty praise on “The King’s” dynamic return to the stage. Elvis’s then-wife Priscilla was in the audience and recalls “ … it was magical. The energy was incredible. He was like this tiger on stage that was unchained with this magnetism that drew everyone in. I’m sitting there in the first row seeing him perform and my mouth dropped open, ‘My God, it’s a totally different Elvis from the one you saw on the ’68 special.’ When you saw him onstage that first night you saw who he was as an entertainer and there’s nothing or never will be anything like it.”

Rolling Stone writer David Dalton was on hand to review the show for the magazine: “I went to the Monterey Pop Festival, Woodstock and Altamont. I covered the Manson story for Rolling Stone so to cover Elvis‘s first live show in many years was a must see for me. Elvis was still a huge idol. We saw him as a god. It was a quasi-religious experience. It was one of those wonderful symbiotic events where the audience and the star are both creating a combined energy field. Elvis was getting off on it. It was like some sort of a strange play starring this little kid from Tupelo, Mississippi who was made King. That show was a really ecstatic event for me to witness. Much of the audience was the same age as him but they looked a lot older. Time had somehow taken its toll on them, but Elvis seemed ageless, almost like a folk hero.”

Noted LA DJ Rodney Bingenheimer is a major Elvis fan and was lucky enough to be in attendance at the historic opening night show and offered his first-hand report: “I was writing for a free national music newspaper called GO magazine. Nick Naff, the publicity director for the International Hotel, arranged for me to cover Elvis’s opening show. He provided two tickets and I brought Screaming Lord Sutch, a British rock and roll singer. We sat at the third table from the front. Rock columnist May Mann was at our table. She later did a book on Elvis. On all the tables was a gift box set — and I still have it. Inside were two record albums — Elvis in Memphis and Elvis, the soundtrack for the ’68 TV special, a bio, a color photo of Elvis, a program and a ’69 calendar.

“I remember seeing celebrities everywhere. I took notes and wrote down all the people I saw: Fats Domino, Governor Pat Brown, Phil Ochs, Barbara Stanwyck, Sonny and Cher, Paul Anka, Donald O’Connor, Henry Mancini, Dionne Warwick, Johnny Rivers with Lou Adler, Mac Davis, and Herb Albert .On the table was a sheet of paper, which had that night’s set list. I have the set list right in front of me and here’s what it says:

I remember that all of those songs were played on the first night. Not only that, but I had a cassette player and I recorded the show. I’m not sure where that cassette is, it might be lost. After Elvis’s first engagement in Las Vegas ended the next month I went to Toronto for the Rock and Roll Revival Show. It had the Doors, Alice Cooper, Little Richard, Jerry Lee Lewis, and Gene Vincent. And of course, John Lennon and Yoko came to the show and played.

The guy who arranged the festival, John Brower, and I went to the airport in a Cadillac limousine and picked up John and Yoko. In the car, I told John that I taped Elvis’s opening show in Vegas. I played him the tape of Elvis singing “Yesterday” and “Hey Jude” from that first show and he was excited. He said, “Very cool, man, very cool.” He got a big kick out of it.”

Concurrent with his glorious return to live performances was Elvis’ commercial and creative renaissance as a recording artist with the recent top five chart placing of “In The Ghetto” and the future number one single, “Suspicious Minds.” Throughout Elvis’ ’69 Vegas engagement, the set list was wide and stylistically varied. Elvis reconnected with his rowdy rockabilly ‘50s roots on “Tiger Man” and “Mystery Train,” delivered commanding power-fueled renditions of his smash hits, “Heartbreak Hotel,,” “Hound Dog” and “Jailhouse Rock,”  and displayed his versatility and robust vocal range on contemporary fare like “Memories,” “In the Ghetto,” and “Suspicious Minds.”

“I was in Vegas for his first engagement and ‘Suspicious Minds’ was headed up the charts and on its way to becoming a big hit,” recalls hit songwriter Mark James. “For me, it was so wonderful to see him perform a song that I’d written. What a once in a lifetime experience! You could tell right away that the song meant more to than him than just being a hit record. He put everything into it, the emotion, the passion and all the choreography with his karate moves. It became his song.”

From 1969-1976, Elvis was the must see concert attraction in Las Vegas and his legacy in “Sin City” set the stage for decades to come with musical luminaries, Elton John, Celine Dion, Cher and countless others following the path that Elvis forged. Always ready to rise to a challenge, Elvis’s transformative return to live performances in Las Vegas established him once again as a giant in rock and roll music.