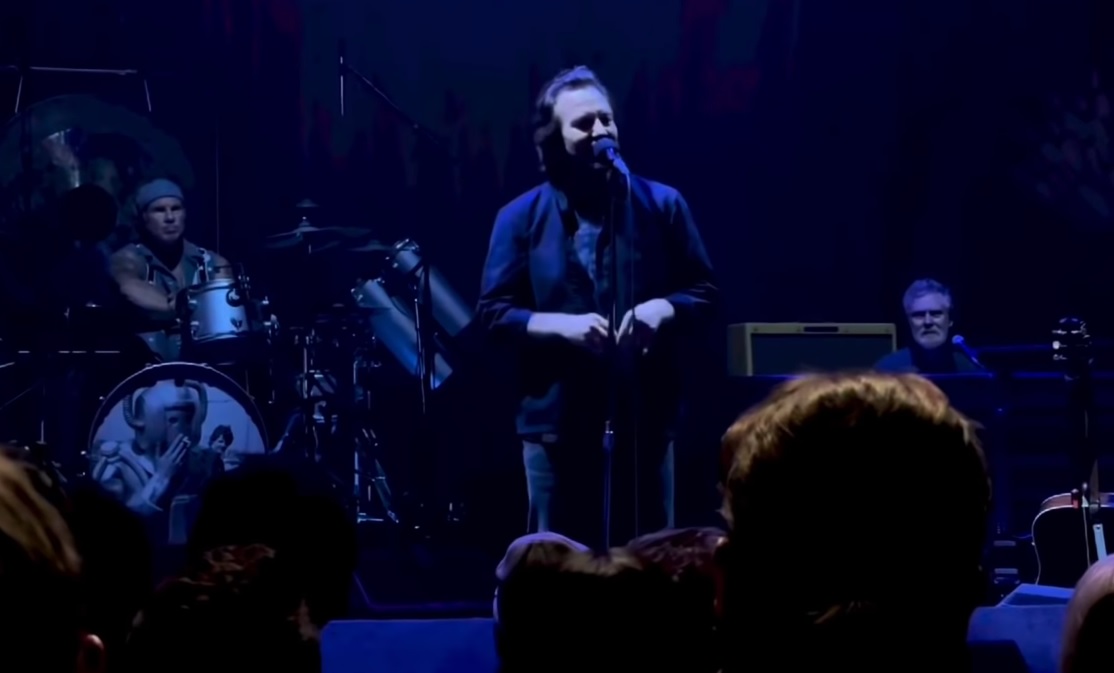 On Tuesday, the sad news came through that Mark Lanegan died at the age of 57. The influential and revered musician was an icon in the rock scene for his work with the pre-“grunge” band Screaming Trees and extensive collaborations with Queens of the Stone Age, to name just a few of his projects. Tuesday night, Pearl Jam front man Eddie Vedder took a few minutes during his concert at Seattle’s S. Mark Taper Foundation Auditorium at Benaroya Hall to address Lanegan’s passing and pay his respects.

Obviously quite emotional about the loss, Vedder remarked that, “I got here about four o’clock and all of the sudden my body started shaking a little bit and I started to feel really terrible and I think it was because I was having an allergic reaction to sadness because we lost a guy called Mark Lanegan.”

“Some people know Seattle because of the musicians that have come out of the great Northwest,” Vedder continued. “Some of those guys were one of a kind singers. Mark was certainly that with such a strong voice.

“It’s hard to come to terms, at least at this point. He’s going to be deeply missed and at least we’ll always have his voice to listen to and his words and his books to read. He wrote two incredible books in the last few years. I just wanted to process it and put it out there and let his wife and loved ones know that people in his old stomping grounds have been thinking about him and we love him.”

Vedder and his backing band, The Earthlings — an all-star lineup comprised of Red Hot Chili Peppers drummer Chad Smith, keyboardist/guitarist/vocalist Josh Klinghoffer (formerly of the Chili Peppers and now with Pearl Jam), guitarist/producer Andrew Watt, bassist Chris Chaney (Jane’s Addiction) and singer/songwriter Glen Hansard — then performed “Tender Mercies,” a Hansard/Vedder song that was released in 2021 on the Flag Day soundtrack, according to Jambase.

Eddie Vedder is out on the road supporting Earthling, his new solo album that was released on Feb. 11 that features more earnest, emotional songs from the vaunted Pearl Jam icon, including guest appearances from Stevie Wonder, Sir Elton John and Ringo Starr.

Since its release, Earthling has been met with rave reviews and chart success — debuting at No. 1 on Billboard’s Current Albums Sales, Album Sales and Rock Albums charts.

After a brief rescheduling of shows due to a COVID-19 diagnosis in the touring party, there are two shows remaining on the tour: