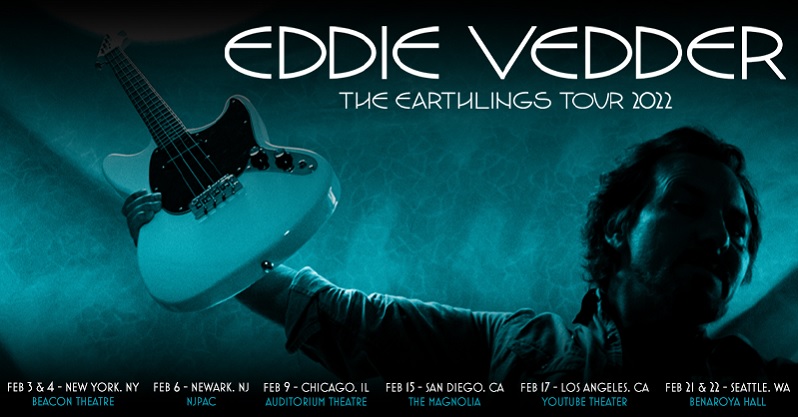 Eddie Vedder will be up to some big things next year. The Pearl Jam front man has a new solo album, Earthling, due out on Feb. 11, and on Wednesday the iconic singer/songwriter detailed a run of February tour dates with his backing band, The Earthlings.

Eddie Vedder and bandmates, the Earthlings, will hit the road in a series of U.S. concert dates in February 2022.

The dates, which wrap up with two gigs in his hometown of Seattle:

A news release notes that there will be no public ticket on sale for this tour: All public tickets will be available through Ticketmaster Verified Fan Registration. Verified Fan ticket registration is open now through Sunday December 5 at 5pm PT. To register, please visit: HERE​.

Announced a few weeks back, Earthling will be Vedder’s third proper full-length solo record and the first since 2011’s Ukulele Songs. He previewed it with “The Haves”:

And “Long Way,” which was premiered live at his Ohana Festival in October with that backing band mentioned earlier.

After his solo tour, Vedder will get back to business with Pearl Jam, which recently announced that its previously postponed North American tour in support of 2020’s Gigaton will reconvene and start back up in May 2022. The dates will be revealed in early 2022: