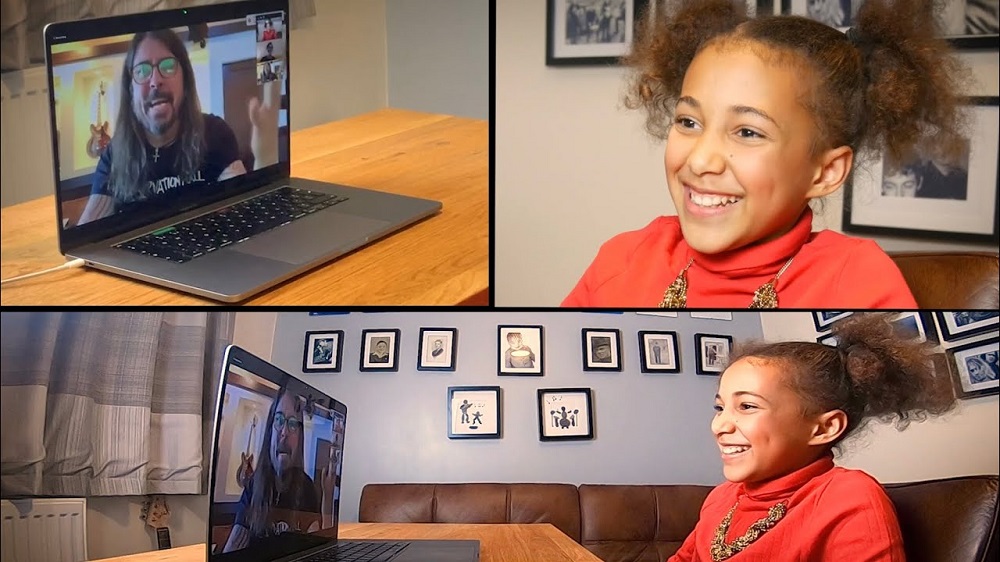 The epic back-and-forth between Dave Grohl, band leader of the Foo Fighters and bona fide rock star, and Nandi Bushell, a 10-year-old music phenom whose series of YouTube performance videos shot her to international acclaim, has been a source of abundant entertainment for the past month or so.

Bushell’s skills, which blow most viewers away given her young age, led to a few “challenges” with Mr. Grohl, spirited competition videos like this:

… and Grohl’s response, which was basically Nandi’s very own personal superhero theme song:

The latest update from this budding musical rivalry/friendship came via the New York Times, which facilitated a face-to-face — well, technically, a screen-to-screen meet-up, as we are still in the grips of the COVID-19 pandemic, after all — between Grohl and Bushell.

Each musician is visibly excited about meeting the other via teleconference, and it’s all a lot of fun.

Mr Grohl! It was an honour and so #EPIC to meet you! I had so much fun talking to you. I really can’t wait for your battle response! I bet it’s going to be TRULY #AWESOME! I really can’t wait to write a song with you and perform on stage with the @foofighters @nytimesmusic pic.twitter.com/LkfCongCek

While the next installment of their “drum battle” is forthcoming (Grohl and the Foo Fighters are a bit busy right now, having recently debuted a new song on SNL and planned a live stream event for Nov. 14), he did make sure to invite Bushell to drum alongside the band whenever touring is able to happen again:

“When the Foo Fighters finally come back to the U.K., do you think that you would get up onstage and jam with us?” Grohl asks her in the video. “But it has to be at the end of the set, because you’re gonna steal the show. It can’t be at the beginning of the set, because if you come out first, it’s just all downhill from there.”