Home / Dave Grohl, Foo Fighters Confront Westboro Baptist Church Protestors with a Disco Caravan (“You Shouldn’t Be Hating. You Should Be Dancing!”)

Dave Grohl, Foo Fighters Confront Westboro Baptist Church Protestors with a Disco Caravan (“You Shouldn’t Be Hating. You Should Be Dancing!”) 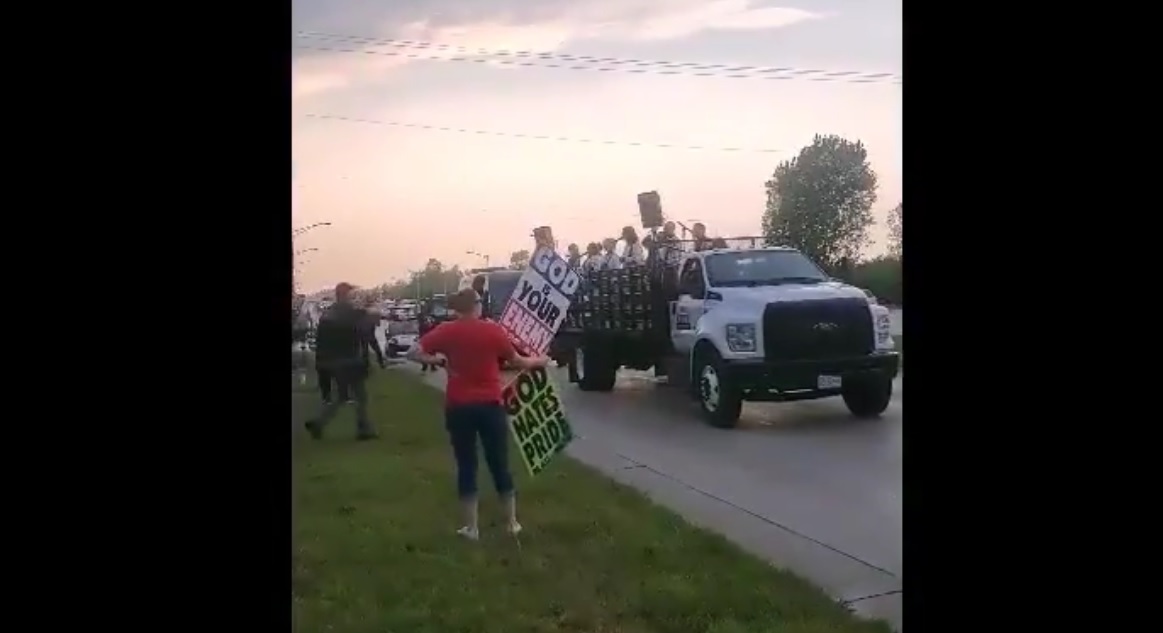 On Thursday night, the Foo Fighters‘ tour rolled into Kansas, which afforded Dave Grohl and the band another opportunity to come face-to-face with members of the Westboro Baptist Church. The religious group routinely sets up shop outside Foo Fighters gigs in the area (and, likely, other concerts where they’re likely to be noticed) with aggressive picket signs.

Prior to the show, the Foo Fighters mounted the back of a truck and rolled down the roadway next to where a smattering of protesters with signs like “God Hates Pride” and the like were gathered, but Grohl didn’t fight fire with fire, so to speak. Instead, he and his band mates were on a rolling disco caravan, as their alter egos The Dee Gees.

The truck stopped right next to the group to spread the magic of disco to the clearly uninitiated. Said Grohl:

“All right now. Ladies and gentlemen. I’ve got something to say. Because you know what? I love you. I do! The way I look at it, I love everybody. Isn’t that what you’re supposed to do? Can’t you just love everybody? ‘Cuz I think it’s about love! And you shouldn’t be hating. You know what y’all should be doing? You should be dancing.”

Here’s another view, from members of the Foos’ production crew trailing behind them on their journey:

The Foos’ history with the Westboro Baptist Church has led to a handful of moments like this latest one. Back in 2011, they rolled by on a flatbed truck (clearly their method of choice) to deliver a little message of their own:

And in 2015, they channeled pal Rick Astley for some excellent “Rickrolling”:

In addition to the antics above, the Foo Fighters have a handful of upcoming tour dates on the docket, a resumed tour itinerary that makes up for their postponed 25th anniversary gigs that had been planned for last year. The upcoming gigs include an Aug. 26 show at the Forum in Los Angeles, a rescheduled version of their July 17 gig that was pushed back due to COVID-19-related issues in the band’s inner circle.