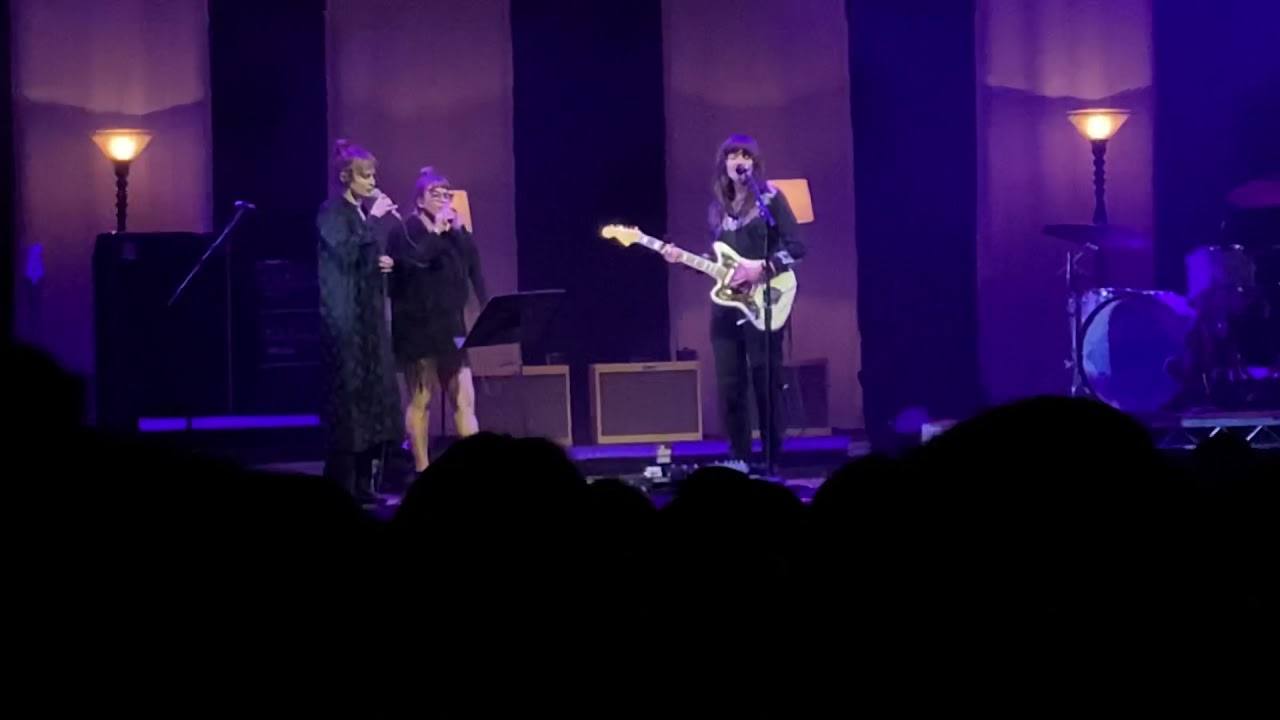 Things Take Time, Take Time is the title of the new studio album from acclaimed singer/songwriter/guitarist Courtney Barnett. She’s currently out on the road supporting the album with a North American tour, which stopped in at the Theatre at Ace Hotel on Thursday night for the first of two Los Angeles shows with special guest opener Bartees Strange, who set the tone for the evening with an intriguing 30-minute set that featured an entrancing cover of The National’s “About Today.”

Barnett and her band delivered a set that weighed heavily on the new material; eight songs from Things Take Time, Take Time were played in addition to songs from earlier releases such as 2013’s The Double EP: A Sea of Split Peas, 2015’s Sometimes I Sit and I Think, and Sometimes I Just Sit and 2018’s Tell Me How You Really Feel.

The Theatre at Ace Hotel is an especially rustic, old-timey venue in a city full of them, and its confines provided the perfect vibe with which to enjoy Barnett and her band, Bones Sloane (bass) and Stella Mozgawa (drums). The atmosphere was loose and almost conversational; Barnett frequently addressed the crowd to express her appreciation for their enthusiasm. The stage backdrop was frequently illuminated various colors, with some decorative lamps positioned behind the musicians even lighting up as part of the visual accompaniment.

The lighting behind the stage frequently paired with the colors associated with specific songs; “Turning Green,” for example, featured a green-filtered stage as the band rocked through the song’s instrumental outro, decorative lamps flickering accordingly:

Up until the encore, Barnett stuck to the set list she’s been playing for most of this current tour, but then things got a bit interesting.

After cracking a joke about how many “important people” were at the show, given that it’s in Los Angeles and everything, Barnett called up on a few friends — Jess Wolfe and Holly Laessig of indie-pop band Lucius — who came out on stage and provided additional vocals on a gorgeous cover of “Everything Is Free,” Gillian Welch’s classic track from her 2001 album Time (The Relevator):

They then remained on stage to assist Barnett through the final two songs of the evening, “Oh the Night” and “Before You Gotta Go,” two more tracks from the new record.

In all, it was an excellent performance from start to finish, Barnett frequently using her Fender Kurt Cobain Jaguar guitar (the same one she used on Jimmy Kimmel Live earlier in the week). She and her band mates have a great rapport on stage, Barnett wailing away on the guitar and inspiring more than a few folks to get up from their theater chairs and let loose in the aisles.

There’s a reason Courtney Barnett has become a revered figure in the indie/rock scene; her albums are thoughtful and inspired slabs of grunge-y, lyrical melancholia that all work together to form a rather undeniable power — and that power translates seamlessly to the stage.

Catch a show from the upcoming dates: