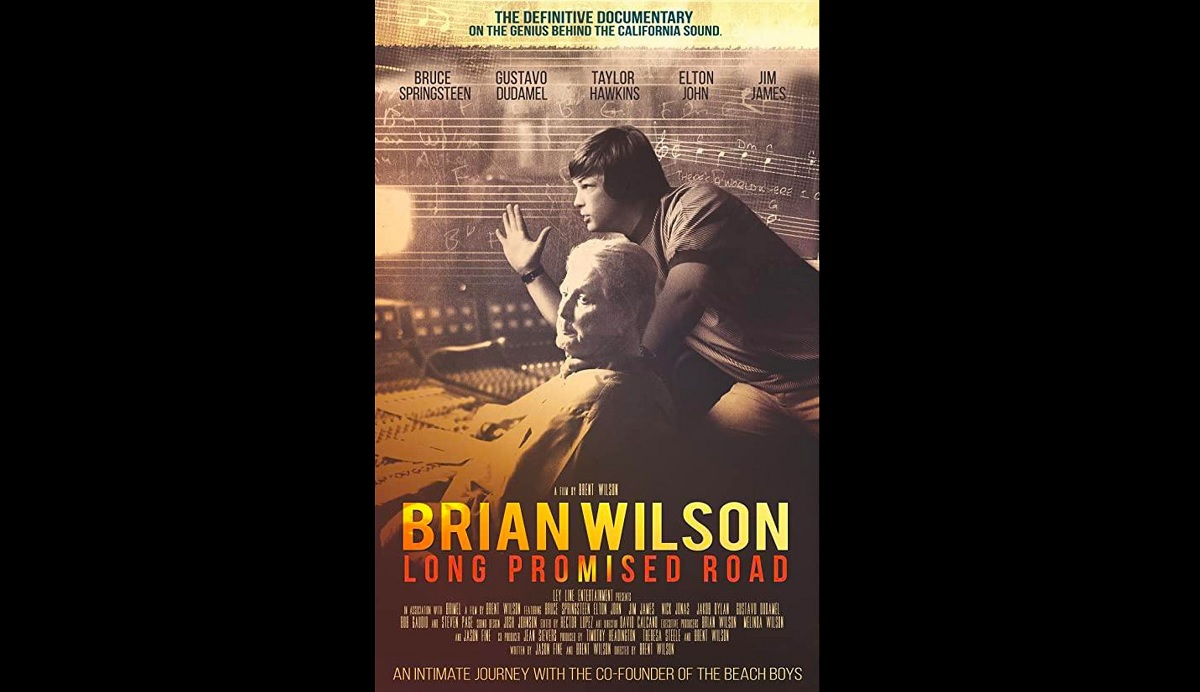 Long Promised Road is the title of an upcoming documentary film chronicling the life, career and legacy of Beach Boys figurehead Brian Wilson. Drawing its name from a song on 1971’s Surf’s Up (a track written by Carl Wilson and Jack Rieley), the film will have its world premiere at the Tribeca Film Festival in June.

The Brian Wilson documentary “Long Promised Road” will have its world premiere at @tribeca this June. Dates and details to come.#brianwilson#longpromisedroad#documentary#tribeca#tribeca2021#worldpremiere pic.twitter.com/DygO4aAnuU

Tuesday morning, Wilson’s socials shared the poster for the doc, a striking image combining two distinct eras of the singer/songwriter’s career — both young Brian and contemporary Brian, seen together at the sound board. The tweet also tags Bruce Springsteen, Gustavo Dudamel, Taylor Hawkins (of the Foo Fighters) and Sir Elton John, strongly implying their participation in this project:

Long Promised Road was directed by Brent Wilson, whose IMDB page includes past credits on American Idol, CMT’s Next Superstar, and Streetlight Harmonies, a 2020 documentary on the history of doo-wop that writer Ed Rampell reviewed for Rock Cellar at this link.

Per the Tribeca website, here’s a synopsis of Long Promised Road:

When Rolling Stone editor and longtime friend Jason Fine drops by the L.A. home of songwriter, producer and Beach Boys co-founder Brian Wilson, Fine suggests they cruise around the city he knows so well to visit old haunts and give Brian the opportunity to reflect on his life and music. They first head to Paradise Cove – photo session site for the Beach Boys’ first LP – then to Hollywood, Malibu, and the stomping grounds of hometown Hawthorne. Spontaneously “spinning” Mp3s of his favorite cuts along the way, Brian delves into his childhood, his contentious relationship with dad Murray, the nine-year “prison sentence” under the “guidance” of Dr. Landy, his struggles with depression and mental illness, his love for brothers Dennis and Carl, and the many recording sessions.

Weighing in are admirers and those close to him, including Al Jardine, Don Was, Bruce Springsteen, Elton John and Linda Perry. Punctuated with memorable concert, studio and interview footage and graced by the new song “Right Where I Belong,” recorded specifically for this film, this entertaining, informative, at times heart-tugging road trip provides both a first-hand, intimate look into Wilson’s storied life and further inspiration to anyone who has been touched by his music.

While we wait for more news on the documentary, click here to read writer Steve Rosen’s reverent appreciation of Wilson in a Behind the Curtain column, recollecting a past interview experience at the musician’s home. A snippet:

So, no, it wasn’t a perfect interview by any stretch of the imagination but I think or would desperately like to believe that Brian Wilson dug the moment. I really hope so. I repacked my cassette player, punched the plastic tabs from the tape so it couldn’t be recorded over — which I’ve done, and that’s a misery all its own — and rose to take my leave. I shook his hand for a second time, and maybe it was all in my head but I thought he gripped it a little more firmly than our first shake. I had him sign the Imagination CD [I wanted him to sign a Beach Boys album but for some idiotic reason, I hadn’t brought one] and walked out the door.

As I was leaving, I turned around and caught his eye. Wordlessly he said, “They tell you things about me. From time to time I am afraid of the questions. I run from the reality of them. But I liked you and I think you liked me. Was I who you thought I would be?”

Oh, yes. You were everything. My mom, my dad, my dog, my first guitar. You were hope. You were magic.

You were Brian Wilson.