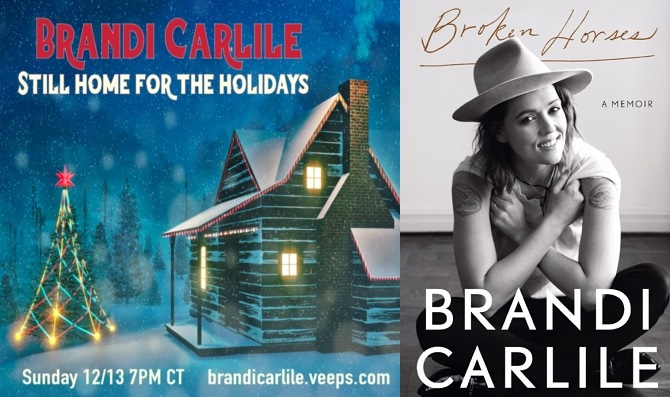 Come join us for our Holiday Livestream!
Request your favorite Christmas songs, random covers, and Brandi Carlile songs! We loved the campfire night with y’all! Let’s bring it indoors to my log cabin. Who knows what’ll happen?…

The stream is being hosted by Veeps, and Carlile took the opportunity to offer streaming tickets packaged with her new memoir, Broken Horses, which will be released in April 2021.

Brandi Carlile will also participate in Cyndi Lauper’s tenth annual Home for the Holidays live stream, which is set for this weekend (on Dec. 11 and 13, via TikTok and YouTube).

Carlile is riding high at the moment, collecting a pair of GRAMMY nominations ahead of the 2021 ceremony. She’s up for Best Song Written For Visual Media (for “Carried Me With You” from the film Onward, written with Phil Hanseroth and Tim Hanseroth) and Best Country Song (“Crowded Table” performed by The Highwomen, written with Natalie Hemby and Lori McKenna).

In addition to her work making and producing music, Carlile has a passion for charitable endeavors as well. Per a news release:

On top of her work as a musician, Carlile is a founder of the Looking Out Foundation. Created in 2008 with longtime bandmates Tim and Phil Hanseroth, Looking Out amplifies the impact of music by empowering those without a voice with varied initiatives including campaigns focused on Children in Conflict/War Child, The If Project, Fund Racial Justice and more. To date, they have raised over $1 million benefiting children whose families, communities and schools have been torn apart by war through their 2017 Cover Stories project.