When Blink-182 continued on with Matt Skiba in 2015 despite the absence of vocalist/guitarist Tom DeLonge, many fans weren’t sure what to expect. DeLonge had always been one of the trio‘s signature sounds, both vocally (his higher-pitched tone a stark contrast to bassist Mark Hoppus, as the pair split vocal duties), and it’s just tough to replicate that with somebody new.

To his credit, Matt Skiba (of Alkaline Trio) was more than willing to step in and sing DeLonge’s parts live, and fully set on the band’s new era, he, Hoppus and drummer Travis Barker headed into the studio. The result was California, a mostly straightforward set of punk tunes from the three, produced by John Feldmann.

While the California album had its bright moments, there was a bit of awkwardness about with Skiba assuming the role left by DeLonge — and while the songs were carried out by very capable punk songwriters who knew what they were doing, it didn’t feel as adventurous or envelope-pushing as it could have. 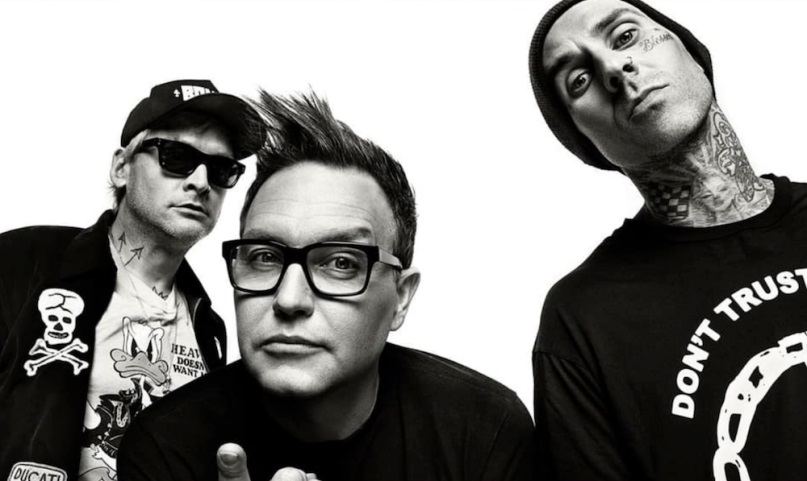 Today, this version of Blink-182 releases its new album, Nine, and to say it’s a big step forward would be an understatement. Feldmann was back as producer for much of the album and has co-writing credits on nearly every song, but there are a handful of additional musicians/songwriters/producers involved on other songs.

Simply put, this album finds Hoppus, Barker and Skiba more comfortable together than before. There’s even some experimentation, like on the song “Black Rain”:

“On Some Emo Shit,” the only song credited to just the three members of the band, is another standout.

While “I Really Wish I Hated You” could be destined for heavy radio play:

What’s interesting about Nine is the depth of the record, considering none of the songs above were released as singles ahead of the album’s unveiling (except “I Really Wish I Hated You,” which was just released two weeks ago). That honor went to “Blame It On My Youth,” “Happy Days” and “Darkside,” which are more tried-and-true Blink-182 compositions.

But it’s the other tracks, the “deep cuts” of the album that really help it stand out. Like “Run Away”:

And “No Heart to Speak Of,” mostly led by Skiba on vocals:

Fans still anxious about DeLonge’s departure need not worry anymore, really. The music on Nine is a confident set of songs from a band that sounds rejuvenated in its new form, having shaken off the initial pangs of uncertainty caused by the split from a longtime principal creative force.

If you’ve never really liked Blink-182’s music, you might still enjoy this one. Gone are the juvenile jokes and “potty humor,” for the most part, replaced by songwriting depth and enough variety here to bring on some new listeners.