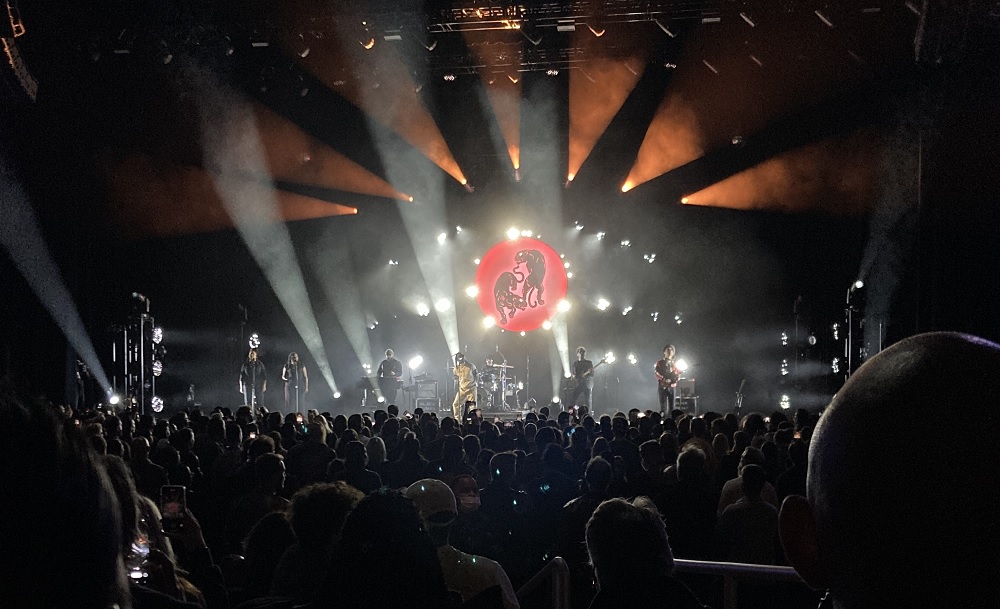 Black Pumas have enjoyed a remarkable rise, riding a wave of momentum to four Grammy Nominations thus far, including Best New Artist, Record of the Year and Album of the Year, led by “Colors,” a song the band performed during the awards show. The track was also a highlighted performance from Celebrating America, the primetime special that aired back in January as part of President Biden’s Inauguration festivities.

This attention and praise heaped at the band is very well deserved; 2019’s self-titled debut record established the blues/rock/psychedelic soul outfit from Austin, Texas, as a can’t-miss project with a dynamic live show. That live show rolled through Los Angeles last week with a powerful performance at the YouTube Theater, the new state-of-the-art facility housed inside the same concourse as SoFi Stadium, the home of the Chargers and Rams and upcoming host of the Super Bowl LVI in February.

The show was a rescheduled version of a concert that was moved due to COVID-19, and the new date came as the Omicron variant has been making its presence felt across the country; the venue had a vaccination policy in effect and checked cards or negative test results for admittance. Inside, the majority of fans seated in the venue adhered to the mask policy, except when consuming food or beverages.

Despite the context of this show amid a potential new surge of the coronavirus, the vibe in the room was one of celebration and exuberance reflective of the band’s incredible trajectory. Black Pumas today carry with them a tangible aura, a momentum that lent itself well to a few new/unreleased songs peppered throughout the set.

Vocalist/guitarist Eric Burton (who was born in LA’s San Fernando Valley and honed his musical stills prior to relocating to Texas) held a steady presence commanding the stage. Backed by a band totaling seven in number (including guitarist/producer Adrian Quesada), he wore a white-on-white track suit and sunglasses for much of the performance, very much the picture of style.

Vocally, his voice sounded perfect leading the band through ten songs from their debut album and four unreleased and/or new songs, including the tender “Angel,” which he performed alone onstage.

The night’s most anticipated track, “Colors” was the final song before the encore, and inspired many of the (mostly still-seated) fans to finally get up and let loose. The stage lighting illuminated the band’s dynamic logo in various shades of colors throughout the song, a fitting touch that complemented the song well:

There was a real treat for the encore, however. Burton showed up in the first row of the balcony with a mic stand and his guitar, leading the band through its cover of Tracy Chapman’s “Fast Car,” a cover song perfectly suited for Burton’s vocal range and a highlight of the YouTube Theater gig for any fans that hadn’t filed out of the venue after “Colors”:

That intimate performance and the night-capping “Fire” were an excellent exclamation point to a magical evening, one that demonstrated Black Pumas have the promise and the pedigree to be here for the long haul.

Black Pumas have yet to premiere any new recorded music as a follow-up to their acclaimed 2019 debut, but one would think it isn’t too far away. When it is released, expect even bigger things from the group — which is saying something, given how far they’ve come in such a short time as it is.