Home / Biffy Clyro Bassist James Johnston on ‘A Celebration of Endings’ & Resuming Live Concerts: ‘As Soon As We’re Able to Figure It Out, We’ll Be Knocking Down the Door’

Biffy Clyro Bassist James Johnston on ‘A Celebration of Endings’ & Resuming Live Concerts: ‘As Soon As We’re Able to Figure It Out, We’ll Be Knocking Down the Door’ 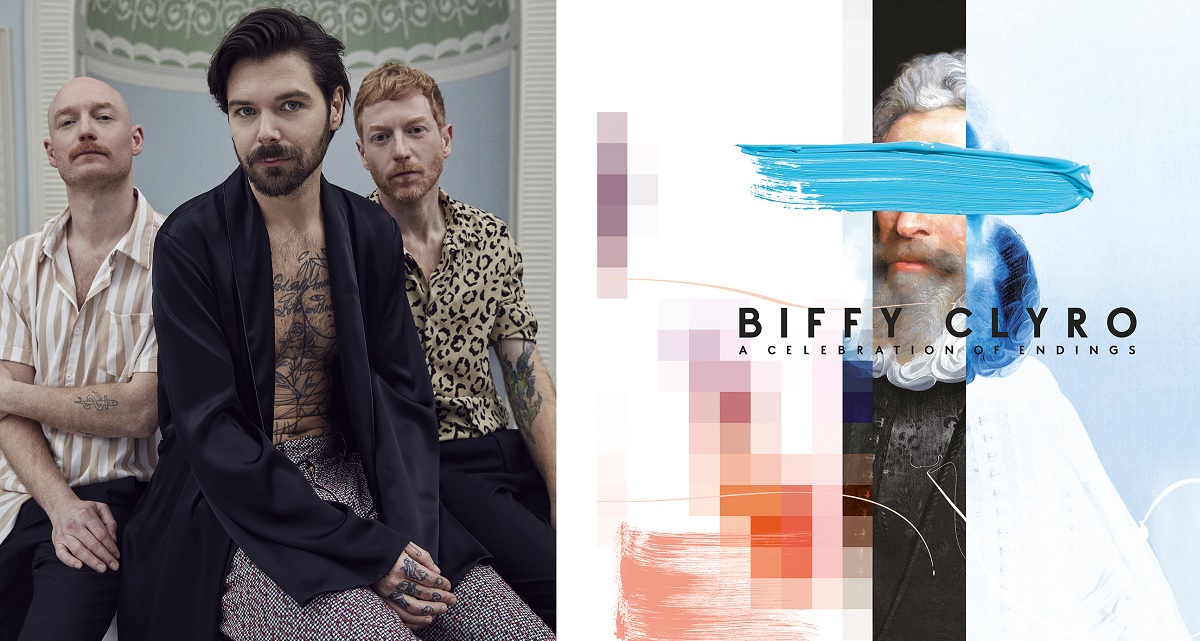 “Many of Horror,” a pop-leaning top 10 U.K. charter for the Scottish rock trio, was a prime example. The accompanying 2009 album Only Revolutions spawned five more hit singles and sold over a million copies at home.

Bassist James Johnston believes the classical touches provide a sense of grandeur and make everything feel “so rich and so lush. There’s nothing more emotional than hearing a string section playing together,” he said in a phone interview from home in Glasgow. “Even without the rest of the band, I would pay money to hear that.” 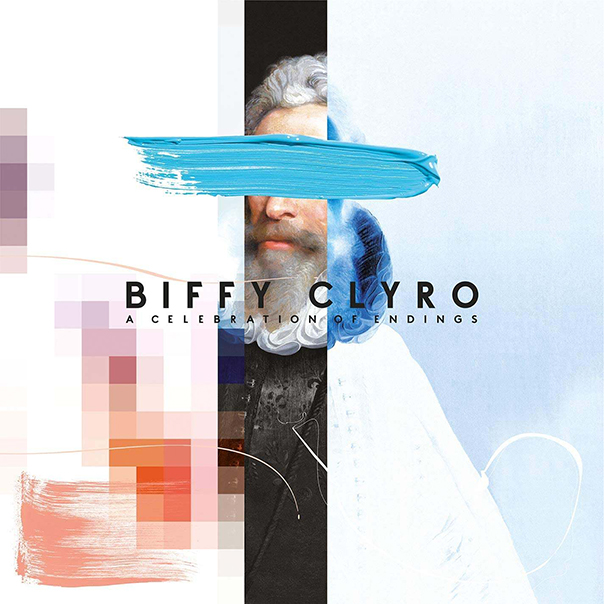 For the handful of orchestrations on Biffy Clyro’s compelling new album A Celebration of Endings, the band enlisted Emmy Award-winning arranger/conductor Rob Mathes, whose credits include Bruce Springsteen, Sting and Pavarotti.

(Click here to purchase A Celebration of Endings from the Rock Cellar Store).

“To get the chance to go record the strings in Abbey Road was just a real boyhood dream,” enthused Johnston. “That was incredible; a real ‘pinch yourself’ moment.”

The manic, yet glorious closing track “Cop Syrup” runs over six minutes long, with most of the time given over to violins, cellos and violas. Johnston said he and twin brother/drummer Ben did not get their heads around singer/guitarist Simon Neil’s vision at first.

“It’s a real trip. Simon had such ambition for that song that honestly, it took Ben and I a long time to understand and really hear how big he wanted that song to become. Of course, in the practice room we don’t have a string section and we don’t have flutes. There’s only three of us. So, we had to keep trying to imagine the way the song was building. Ben and I had a lot of work to do to really get the rhythm track to support that much music.

“I love the juxtaposition of the really in-your-face, punky, shouting and slapping-you-about-the-face verse,” he continued. “You go through this crazy outro for ages and then it comes straight back and slaps you about the face again to remind you where you started. I can’t wait to play that live. The album is only 43 minutes long, but after you get to the end, you really feel like you’ve been on a journey.”

Biffy Clyro’s musical path began when Neil met the brothers in Kilmarnock, Scotland. They were all around seven years old. Playing music as teens, the trio released a debut EP in 2000.

Two decades later, James Johnston said the key to the band’s longevity was growing up and attending school together.

“Having that shared bond as young boys, then as young men and men — is really important. Loving the same bands (such as Rage Against the Machine, Nirvana) brought us together musically …Also, not moving away from home. We didn’t go for the bright lights of London or move to Los Angeles — as much as we would have loved to. It keeps us grounded.

“There’s no room for stars here in Scotland, really. We don’t really celebrate stardom in the same way. That’s what it’s like in this part of the world. People have a sort of rainy outlook.”

Recording A Celebration of Endings last year in Los Angeles provided a welcome change of scenery.

“There’s a sunnier disposition (in Southern California). Never mind the weather. People are more positive and are like, ‘If you dream it, you can do it.’ I think the balance of those two elements in our life is really important to keeping us together and still allowing us to have dreams.”

Johnston likened the continued working relationship to “going on a second date. We’d gotten to know each other a little bit, there was a better communication and we understood each other’s jokes a little bit. We knew when each other was getting pissed off. It really helped. I think that communication was really key … Rich has such an exploratory mind. He wants to try every single sound.”

Endings runs the stylistic gamut, from the near-lullaby “Space,” a tranquil “Opaque” and the infectious alt-pop of “Tiny Indoor Fireworks” to the Tool-style crunch in “End Of” and aggro blasts in “Worst Type of Best Possible.”

One song that had a longer-than-usual genesis was “Instant History,” where synthesizer programming adds a slightly danceable EDM vibe. Being known as a guitar rock group, Johnston said the musicians were initially hesitant about including it, but they really wanted to push past old boundaries.

“It’s not a traditional sound for the band; it’s us taking a few risks,” admitted Johnston. “We knew the song and the melody was great, but we didn’t really know how to play it together. We got a little bit stuck. It took some perseverance. Simon had to figure it out on his own. In the recording process, Ben and I ended up taking a few attempts at that song … sometimes you have to go out of your comfort zone. In this instance, it was really worth it.”

Indeed. The current top 20 rock radio track is among the guys’ most successful in America.

Although the brothers regularly supply backing vocals, their awesome harmonies on “North of No South” and “Weird Leisure” verge on early Queen territory. That approach wasn’t the specific aim, but Johnston doesn’t deny the classic rock superstars’ importance.

“We’re all trying to make the sound as big as possible. Queen are a band that we’ve never really talked about much in the past. But there aren’t many rock bands around that wouldn’t be influenced by them in some way. That huge harmony sound definitely attracts us.”

Lyrically, Neil’s lyrics on the album tend to look more outwardly at the world than usual: a heavy, but melodic “North of No South” touches upon world leaders; the string-laden standout “Opaque” is about being taken advantage of in business matters (key lyric: “you took the money and run”); “The Champ” delves into the environment. Then there’s the galloping “Weird Leisure,” involving a drug addiction battle faced by a friend.

“I’m constantly amazed at how he’s been able to share something so personal and make it seem so universal,” marveled Johnston. “The best lyrics apply to everybody.”

Overall, the bassist is proud of how Neil’s imagery is “really striking and strong. There’s a couple of lines in ‘The Champ’ that even now, when I hear them, it just creates such a vivid picture in my mind.”

“This is the most unashamedly sincere song… It’s about coming back to someone and knowing nothing has changed.” You can now download the new single ‘Space’ via the link in our bio.

Last year, Biffy Clyro made its first foray into film soundtrack work on the U.K. drama Balance, Not Symmetry. Although the movie barely made a ripple, the eclectic music — featuring co-writing collaborations with John Feldmann, Stuart Price and John Hill — also served as a strong standalone effort.

Unlike most soundtracks, Neil talked with the film director/writer about what themes might be in the movie and the music first.

“Then we went away and wrote and recorded all the music before the movie was shot,” explained Johnston. “It was backward in that approach. It’s like they shot a movie to match the music. It gave us huge amounts of freedom in the studio. We could completely go (on a left field turn).

“I think that brought a lot into A Celebration of Endings. We felt like teenagers in the studio again. There was nobody looking over our shoulder at that point. The record label wasn’t the least bit interested in the soundtrack. They were like, ‘Go and do your thing. Whatever.’”

After the COVID-19 pandemic hit, Johnston said the U.K. lockdown was “the first time I’ve been at home all summer for 15 years. Usually, we’re doing festivals or touring.”

When we talked on the phone, he admitted to forgetting how rainy summers in Scotland really are. “The weather is so bad! It’s really depressing. It hasn’t stopped. But with the way the world is and the way things are, I’m trying to find the positives in life where they exist.”

American concert promoters have been putting on socially distanced drive-through concerts lately. What does Johnston think the future of concerts will look like?

“It’s quite ingenious, how they have been coming up with ways to get people back together,” he said. “Music is about a communal feeling. Subconsciously, you’re with strangers in a field, having this shared experience. If you can recreate that while people are in their cars, socially distanced, then I’m all for it.

“We’re in an unknown territory. I think we should be trying to do whatever we can. At the moment, day to day, I’m up and down about it. Sometimes, I feel confident. Sometimes, I feel a bit worried. Music is my life and something I care about personally, but I also feel that in the grand scheme of things (now), we’ve got more important things to deal with.

“Music is more than entertainment, but it’s not more important than your health. I’m trying to strike a balance. Ultimately, I don’t know where we’re going to be tomorrow or the end of the year. I do know people want to see concerts. The bands want to play concerts. As soon as we’re able to figure it out, we’ll be knocking down the door.”