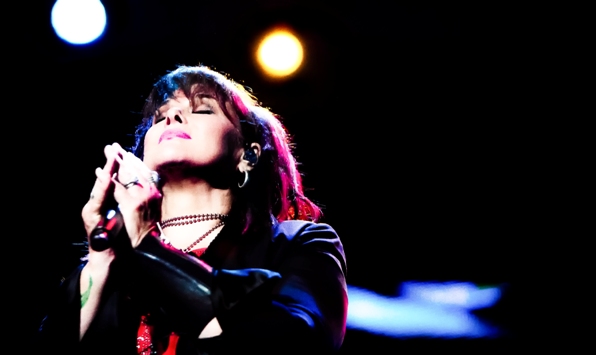 Doing a cover song or a full album of covers can be problematic. The unadventurous ones fall in line with minimal reinvention, and are more intent on a straight Xerox rather than a dramatic reworking. Finding a way to inhabit a song’s essence but infuse it with your own unique slant is the key to a successful reinterpretation–Stevie Wonder’s funky rendition of The Beatles’ “We Can Work It Out” and Joe Cocker’s “fiery soulful take of “With A Little Help From My Friends” are two prime example of wondrous cover that stand on their own. None of that’s a problem for Ann Wilson, one of the finest singers in rock and roll, who lends her mighty vocal firepower and a far ranging creative spirit Immortal, her new all-covers album of songs by late, great musical artists. Pick up a copy at this link.

For this special set of recordings, Wilson re-imagines songs made popular by The Eagles, Tom Petty, David Bowie, Cream, Amy Winehouse, Leonard Cohen, Lesley Gore, Chris Cornell and Audioslave and others. We caught up with Ann while she was out on the road for this past summer‘s “Stars Align” tour with Paul Rodgers and Jeff Beck, for an inside look at Immortal.

Rock Cellar: Living in Seattle for most of your life, what’s the most Seattle thing about you?

Ann Wilson: Well, I think I’m personally part of the natural setting there. What I like about Seattle the most is the big trees and all the green. I don’t like the cold drizzle, but I like the trees a lot. I like the natural beauty. 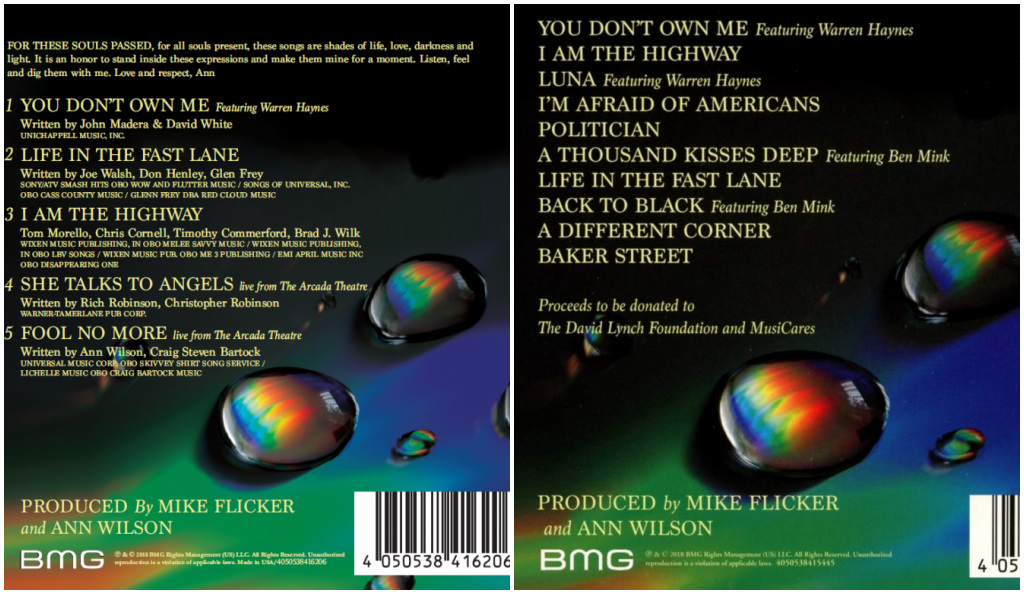 Rock Cellar: What was the thinking behind doing a covers album?

Ann Wilson: There were so many people within a short period that decided this was the time to lift off (laughs).  Thinking about the time that (Linkin Park vocalist) Chester Bennington jumped, I thought, “God, I’ve got to do something about that.”

With so many artists dying, this is an amazing group departure, at least that’s how it seemed to me. The album was done to honor them as a group. I don’t really see any value just sitting around mourning the souls that have moved on because they’re on to the next thing, but the music is valuable, the messages are valuable and I think they’re almost like an oral tradition.

Rock Cellar: It’s one thing to cover a song and do it as an exact reproduction, it’s another to find a way inside and take it to a different place. You didn’t do that and found a way to inhabit them. How did you find a way into them?

Ann Wilson: There wasn’t much trial and error for me. I always believe the songs tell you what to do. If you listen the right way they speak loud. You’re right about people just doing copies of songs and that’s not very exciting; that just makes you a tribute band. (laughs) But it’s also pretty irritating to me when people go in and just mess ‘em up so much like people who try to make jazz versions out of Beatles songs. I always think that’s missing the mark as much the other way.

Rock Cellar: I think you found a good a balance. It’s not like you’re laying down a reggae version of Leonard Cohen song.

Ann Wilson: (laughs) Right. Like, what was that project Dread Zeppelin, they did reggae versions of Zeppelin songs.

Rock Cellar: You chose some very surprising songs by some of these artists, one of which is “Luna,” a track culled from Tom Petty & The Heartbreakers’ debut album.

Ann Wilson: Well, when I used to listen to “Luna” on Tom Petty’s first album, that song would always tell me that it wanted to go farther. I’d listen to it and get into it a lot and then it would be over (laughs) and I’d think, ‘Wow, they could have developed it more.’ Of course, not to question Petty’s instincts.

But at the time I always longed for it to be more developed, and to go deeper into that sultry groove so that’s what I did. For any of these artists that I covered, I didn’t want to just skim the hits off the top, I didn’t just want to go for their hits and do it one more time. I wanted to go for the songs that really turned me on the most.

Rock Cellar: With the The Eagles’ “Life In The Fast Lane,” you went against that logic and tackled a huge Classic Rock FM radio standard. What was your thinking behind doing a much more familiar and beloved track?

Ann Wilson: Well, I think the thing that made me choose “Life In The Fast Lane” is that I couldn’t find a song by them that wasn’t a hit. I had no other choice but to choose a hit. They were such hit makers and in that case I went for a song that I could relate to the most and “Life In The Fast Lane” is really fantastic story telling. It was just a slice of period that was really cool. All of these songs that I chose I think shine just as bright in the present.

Rock Cellar: There are tracks, like “I Am The Highway,” with a significant personal connection to you. You were friends with Chris Cornell.

Ann Wilson: Well, “I Am The Highway” is on my playlist at home for me and my husband. I hear it a lot and it’s a clear sort of secret message from Chris. My relationship with him was we were both singers, we were both from Seattle. Our paths crossed a lot of times socially. I was in a play in Seattle and he and his first wife Susan used to come and see me all the time. I remember being with him backstage at those shows and seeing him outside of the rock and roll vortex.

He was like a child and really interested and dazzled. We went out and had drinks afterward — this was back when I was still drinking — and just really hung out in a lot of ways and didn’t talk much but really communicated deeply. We did a few different jam things with him.

Heart was working on an album called Desire Walks On in Seattle and we were gonna cover a Bob Dylan song called “Ring Them Bells” and we needed a third voice. We asked Paul Rodgers, we asked Robert Plant, we asked everyone, because I wanted a male voice and everyone turned us down except Chris. (laughs) So we recorded a version of Chris singing with us on that song. But his record company pulled it back because Soundgarden was on the way up and they figured Heart was on the way down and they didn’t want us to collaborate. So then Layne Staley [late vocalist of Alice in Chains] stepped in and did it. Anyway, that was one of the musical things we did together.

Rock Cellar: Just last night I saw Ronnie Spector perform and she did a wonderful version of Amy Winehouse’s “Back To Black,” a song you also tackle on Immortal.

Ann Wilson: After hearing Ronnie Spector did it I betcha Amy would have loved to have heard that! With our version, I wanted to take it out of the casual swing that Amy put it in. I just wanted to uncover the true darkness of those words by taking it out of that feel.

I kind of put it in a gothic setting which works, it’s black, it’s really black. (laughs) I mean it goes really far down. At first I went, “Wow, this is such a fucking bummer, this is gonna make people bounce away” but then I thought, “No, let’s look at the beauty of this darkness here and go all the way down.” I think Ben Mink’s strings on that are just crazy enough to make it cool.

Rock Cellar: Speaking of darkness, given what is happening in our country and the divisive political, social and culturally, was choosing to cover David Bowie’s “I’m Afraid Of Americans” a result of the current zeitgeist?

Ann Wilson: Yeah, like my husband likes to say, it’s the lemming nature of the media fed American populace. I’m not saying by any stretch of the imagination that the media is the enemy of the people; I don’t believe that. But it’s like a great big tidal wave of information and isolation. It’s really pretty frightening when you think of it. Another thing that people like to say now because things are too big to talk about they say, “it is what it is” and you have to accept. I think there’s still room for something like “I’m Afraid of Americans,” which is more sardonic than anything else. (laughs)

Looking at what’s happening over here through the eyes of someone who’s not from here, the rest of the world who is watching this from a distance and some from not very much of a distance. I think that we need to look ourselves in a little bit less of a polarized way.

Rock Cellar: Had you made Immortal a double-LP, what songs would you have liked to have included?

Ann Wilson: I probably would have done another Bowie song, “This Is Not America.” I think if it had been a double album I would have doubled up on some of the artists that were already there. I looked for a song by the Cranberries and I looked or a song by Linkin Park but I just couldn‘t find songs by those two that I could really believe in for me.

Rock Cellar: From covering songs by others on your new album to being covered yourself, have there been any interesting covers of Heart songs have caught your ear?

Ann Wilson: Well, some of the ones that get done on shows like The Voice and American Idol are interesting to me because they become more like gymnastic events where the soul isn’t really there, but there are these physical feats that have to be accomplished right for the score, (laughs), especially on “Alone” and “Crazy On You,” So that’s interesting to me from a cultural anthropological way. (laughs) I haven’t heard a whole lot of Heart covers that take them somewhere different.

Rock Cellar: Many of your contemporaries have lost some vocal firepower, yet your voice is still in tip top shape, what’s your secret?

Ann Wilson: Well, I think a big part of that is belief. I found that with a song like “Alone” — with that big high note at the end that everybody waits for — if I go out there and think, “Oh my God, I don’t think I can do this, can I do this?” then chances are I won’t be able to.

But if I go out there and think, “Here comes that cool moment and I’m gonna nail it,” then I do. So much of it hinges on belief.  If you can get out of your own way and just do it and you’re healthy, you can do a lot.

I’ve been listening to Paul Rodgers on this tour and he’s definitely able to do what he always could. He took super good care of himself physically, you have to do that on the road. You can’t be huggin’ and kissin’ strangers and stuff like that. (laughs) if you don’t want to get sick.

If you get sick it’s all over.