Home / Life Behind the Scenes of the 'American Idol' Finale

Life Behind the Scenes of the 'American Idol' Finale 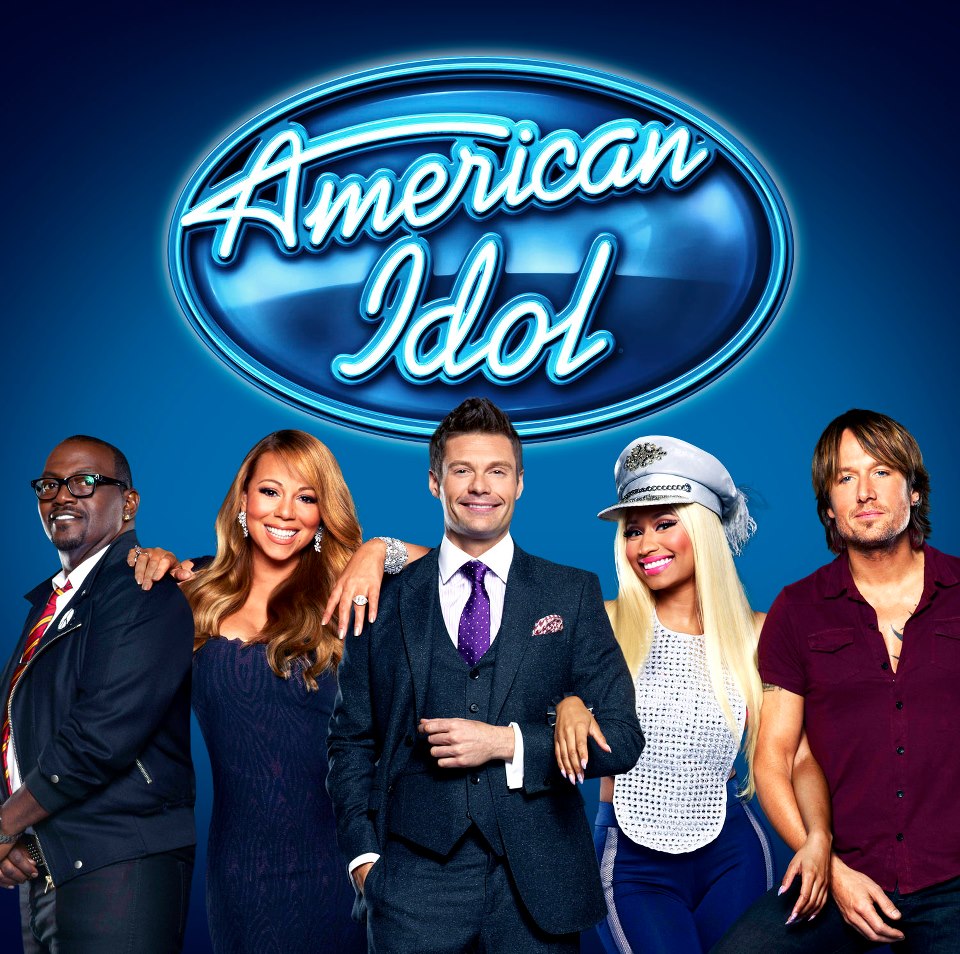 The lights dim as Ryan Seacrest dramatically draws out the announcement of the 2013 American Idol victor, the entirety of the 7,000 seat Nokia Theatre at LA Live silent and waiting with bated breath.  It’s all come down to this: two girls face off in the first all-female finale in five years.

On television, the glitz, glamour, and grandeur fills viewers with inspiration and awe; this once in a lifetime chance to follow a dream that you’ve always had.  But being behind the scenes during the entirety of finale week is humbling, making you realize that it is, after all, just a show.

That’s definitely not to say that the contestants don’t have incredible, raw talent, or that they’re actors that have been cast: they’re certainly the real deal.  The finalists get pulled in every direction for media coverage and don’t have a chance to breathe or even soak in the moment, much less realize how close they are to achieving something that only eleven other people in the world have done.  Viewers only see the spectacle that becomes the final shows, but the Top 10 aren’t sitting around twiddling their thumbs waiting to go on air.
They wake up, go to vocal training, rehearsals, interviews, press conferences and photo-ops, back to rehearsals, then hair and makeup, then they go live.  After?  Straight outside for hours of post-show interviews, on camera and off, and maybe then they get to go back to their hotel to grab a precious few hours of sleep. 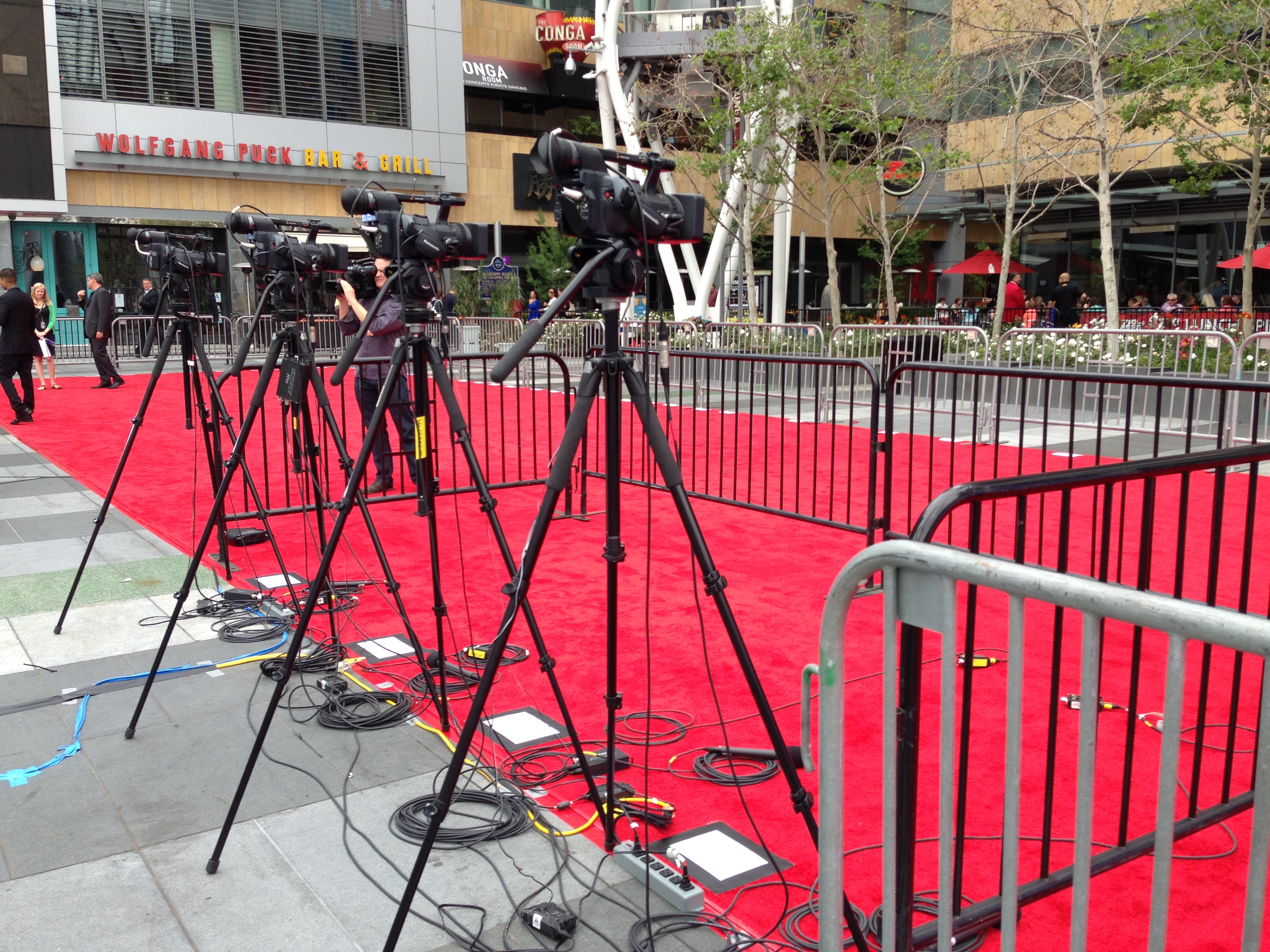 LA Live becomes the central hub for all things Idol: tents popping up in parking garages and roof tops, conference rooms packed, even lobbies turning into state-of-the-art radio stations.  The show has three overarching goals: to entertain the masses, while also bringing in the ratings (which the show desperately needs these days, compared to its heyday) and making the world fall in love with the crowned victor.

Press is easily one of the most important factors of the week.  On Tuesday, the two finalists are brought to a live shot area where a press conference takes place.  All sorts of different questions are hurled at them, but it’s clear that there are topics they can’t discuss.  Often times, they look over to the publicist for help, treading carefully not to say the wrong thing.  After all, how would you feel going from a regular person to having cameras and reporters in your face at every turn?  It’s a total shock. 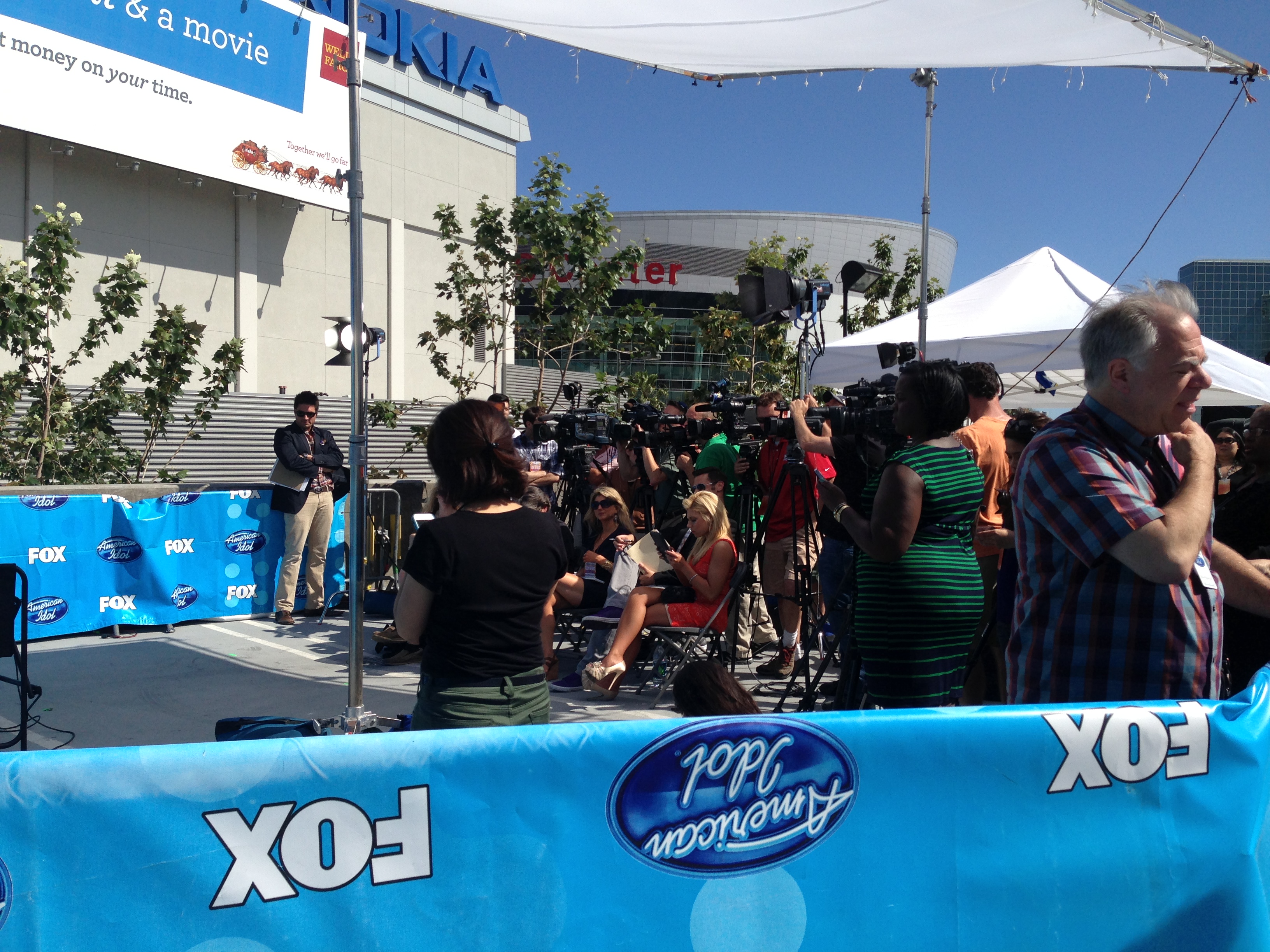 Reporters wait for the Top 2 to arrive for the official Finale Week Press Conference.

In fact, there’s an entire team of publicists that are responsible for the Top 10 when they’re not filming or in the safety of the theater.  The team escorts them to every event, the first major one being the radio round table.  Stations from around the nation come in and set up booths to interview not only current contestants, but also Idols from seasons past.  The Idols jump from booth to booth, as production assistants stand by, coordinating with publicists to bring them upstairs for live and taped news interviews. 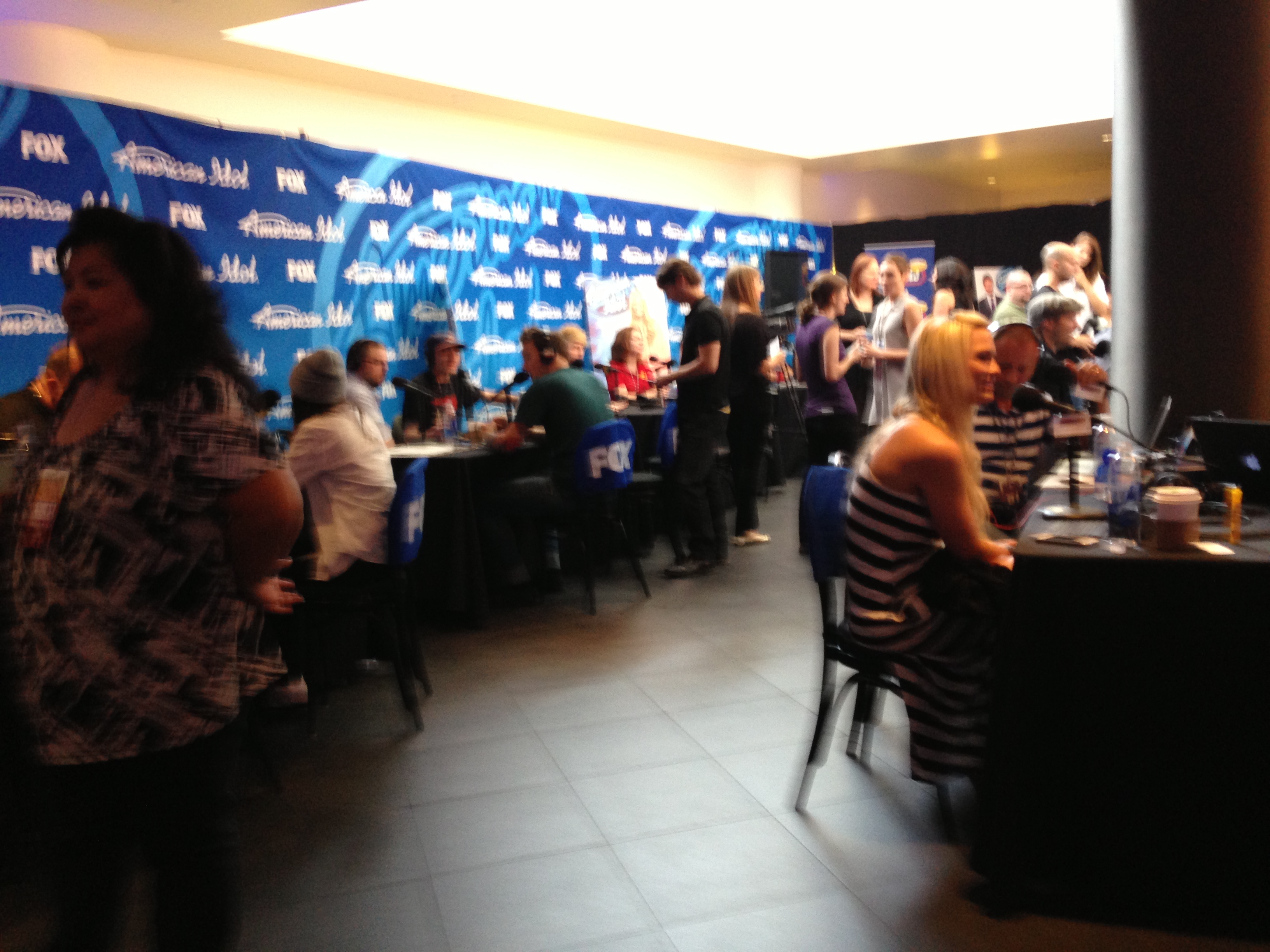 Radio stations from around the country conduct and broadcast live interviews with Idol stars. 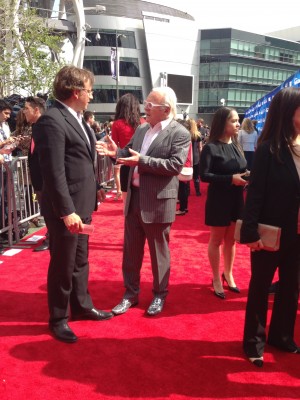 Sir Anthony Hopkins arrives on the Red Carpet and coordinates with his publicist.

The taped interviews later get transcribed and submitted to the different news affiliates, which choose the bits they want to include in their stories.  The news teams also are constantly monitoring the rumors surround the finale, preceding everything with “rumored”, despite some things actually being confirmed.  These interviews are constantly taking place throughout the week, searching for updates and any information that viewers back home can soak up.
Then comes the red carpet.
LA Live is put on near-complete lock down, and even some of the “fans” in the crowd are undercover police and safety officers.  The other people that don’t get chosen to be in the fan pit are then hustled to keep moving, not even being allowed to stop and snap a quick picture.  The streets surrounding are shut down to allow celebrities to arrive at the start of the carpet.  Once they step out, publicists and news producers immediately greet them in order to get their initial reaction.  They are then shuffled down the step-and-repeat, where photographers get a chance to snap as many pictures as they’d like.  Waiting at the end of the step-and-repeat is another news producer, who then works with the publicist to bring the star over for on-the-carpet interviews.
There are four cameras set up for live interviews, a larger area designed for the official pre-show, and then reporters flanking the sides for taped interviews to send back home.  Some stars like talking to the reporters, others get in as many as they can because they need the publicity (one publicist even said “she’ll do whatever you want her to, she needs this”), and others simply breeze down the carpet and straight into the theater. 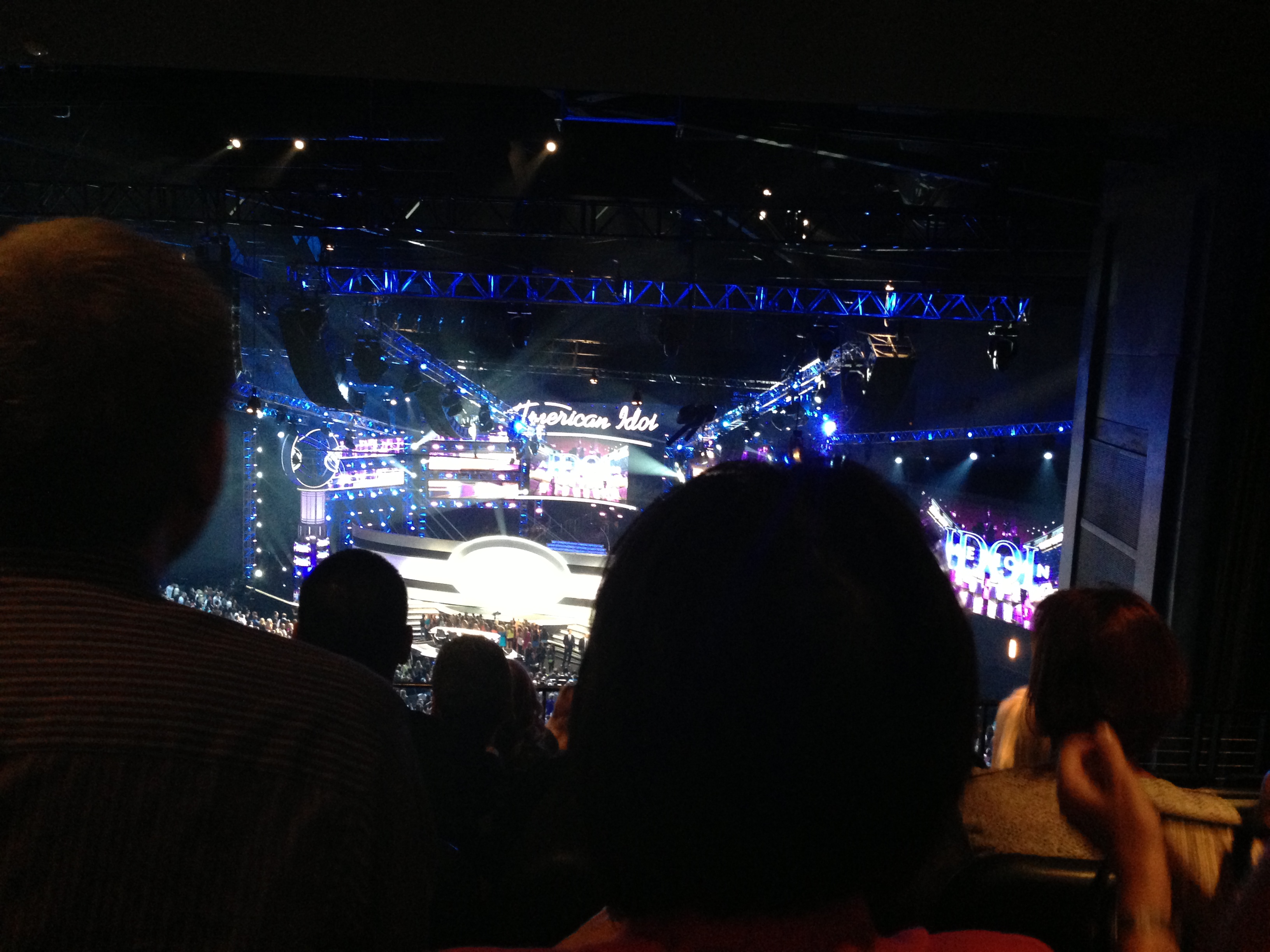 Once inside the theater, the taping begins.  About ten minutes before going live, the “audience warm-up guy” (yes, that’s his actual title) comes out and greets the audience.  He gives a rundown of the show, some safety spiels, and then proceeds to get the audience into party-mode by blasting music and bringing people up on stage to dance.  As the audience builds into a roaring applause, the judges come out, Ryan Seacrest takes the stage, and the show broadcasts across the nation.  The show runs just like you see it on TV, with the focus placed on the judges and Seacrest at strategic times in order to hide the chaotic set-up or tear-down still taking place on stage.  During commercial breaks, the warm-up guy comes back out to keep the crowd excited, until the control room comes on the speakers for the countdown “8…7…6…5….4….APPLAUSE!”.  When the show runs its course, the lights come on and everyone is hustled out to recreate the massive crowd from earlier for the post-show interviews. 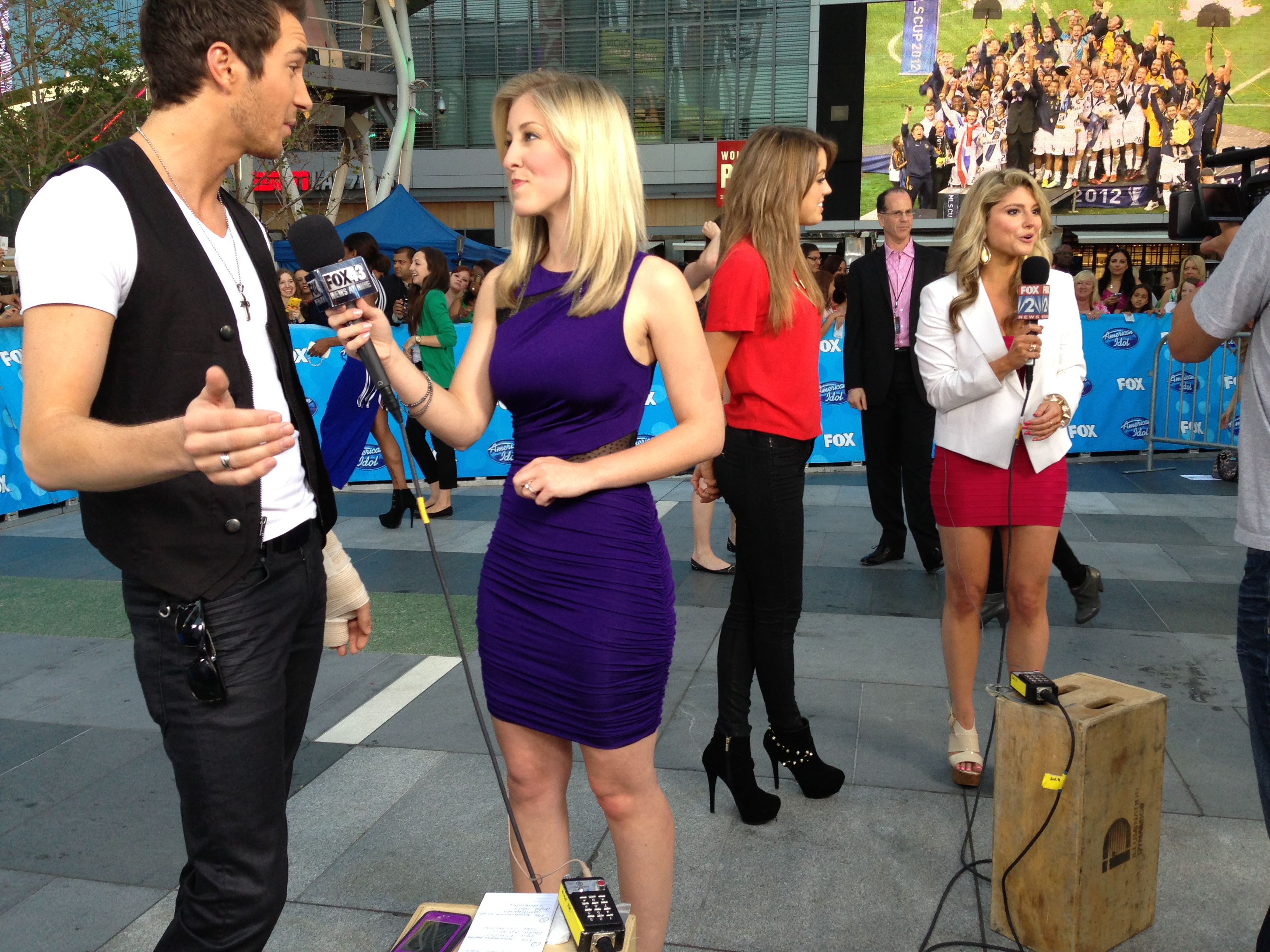 So what’s next for the contestants?  They go on tour, but after that are left to their own devices to utilize the platform and connections they’ve been given to create their own career.  Idol moves on to the next season, to find a new superstar; they don’t have time to help former contestants.  In fact, finalists sign a contract stating that they won’t release any new material until a year later, as not to bring the spotlight off the winner.  If they do, the material is basically owned by Idol and its producers, and thus the single isn’t allowed to chart.

The biggest thing to remember is that it’s just a show.  It’s designed to create drama, build up the tension, and make viewers fall in love with singers that may not be around in a year or so.  But that’s where the real idols are made; not on the show, but after.  The ones with the real passion, drive, and talent take what they’ve been given and run with it, which is why we’ve never heard from some winners again, and other finalists have gone on to win Grammys and even Oscars.
The talent they have is incredible, and with a show like this, some of their voices would never have been heard.