The combination of English indie/rock trio Alt-J and Portland-by-way-of-Alaska alt/psychedelic/indie ensemble Portugal. the Man sounded like a solid pairing when the groups’ current tour was announced a few months back — and the show is even better than anticipated.

A full-on arena tour hitting venues such as Madison Square Garden and, on Sunday evening in Los Angeles, Crypto.com Arena (formerly Staples Center, home of the NBA’s Lakers and Clippers and the NHL’s Kings), it was a showcase of the different paths each band took to get to where it is today. Opening the show as Cherry Glazerr, a local indie/grunge-pop band fronted by Clementine Creevy. Their early set (6:45 p.m.) was met with a small audience of late-arriving concertgoers, though the band did an admirable job warming the audience with songs like “Rabbit Hole.”

As for the headliners, their disparate paths to stardom made for an intriguing match.

Alt-J debuted in 2012 with An Awesome Wave and seemingly became an indie/rock phenomenon immediately; the album won the vaunted Mercury Prize in the U.K. and propelled the group to international acclaim.

Portugal. the Man hit it big in 2017 with “Feel It Still,” the second single from the group’s album Woodstock. After a eight-month period of “sleeper” status on radio, the track eventually hit No. 4 on the Billboard Hot 100 and was a Top 10 hit in several countries around the world, even earning the band the Best Pop Duo/Group Performance Grammy.

Woodstock was Portugal. the Man’s eighth album, though, so they were hardly the “overnight” success some unaccustomed to their versatile career of solid and fiercely original albums as an under-the-radar indie/rock act may have assumed.

But it was a a much-deserved breakthrough for the group, which is now a bona fide arena headliner — and they came prepared. With an overall tone of hyper-aware self-deprecation and a twisted bit of humor about their whole existence, Portugal. the Man’s set began with a Beavis & Butthead clip in which the characters lambasted the “Feel It Still” music video before coming to the realization that the band “sucks” so much, it is actually the greatest band in music history:

It was after that amusing introduction that Portugal. the Man emerged. It was hard to tell how many people were on stage due to heavy smoke effects and glowing, lightsaber-like decorations on all corners of the performance space, but it was definitely more than eight people, with a horn section hiding in the back.

The set list may say the band played 13 songs, but that hardly does it justice; opening with an instrumental heavy metal medley of Metallica (“For Whom the Bell Tolls”), Slayer (“South of Heaven”) and Pantera (“Cowboys from Hell”), Portugal. the Man busted out spirited covers a few times — some of which served as interludes into their next original songs, an excellent option rather than the customary few seconds of awkward silence between songs that is usually what you see at an arena gig.

The video screen behind the band before and during the set flashed messages to the audience, some of which were pretty amusing, like “Our guest list would be bigger but our famous friends are all at the Oscars tonight” (as the awards show was taking place down the street in Hollywood). Others built the mood appropriately:

.@portugaltheman knows how to cater to a California crowd. #Californication pic.twitter.com/w63V4MchFD

In terms of actual songs performed, Portugal. the Man played its new single, the upbeat “Feel It Still” sequel “What, Me Worry?”, a few as-yet-unreleased new songs and some choice selections from the group’s lengthy back catalog (like the Censored Colors standout “And I.”)

The spectacle of a Portugal. the Man show in 2022 is a marvel to witness, given the band’s album trajectory and the shifting in styles that has taken place in the past decade … though it’s a shift that retained the group’s singular musical spirit throughout. The show is a little bit chaotic (by design), what with the smoke machine, abundance of people on stage, video screen messages and the genre-jumping with all of the covers.

But it’s a captivating sort of chaos, an artful exercise in trying to make sense of our twisted existence and the confusion therein with as much musical and visual stimulation as possible.

They’ve more than earned their success, and while a bona fide Billboard chart hit probably never felt in the realm of possibility for the band back in its early days, it suits them well. There’s nobody else quite like Portugal. the Man, and that’s a good thing, because it makes them that much more special.

This same sentiment can be shared for Alt-J, which performed a set of songs from throughout its career with one of the most visionary stage spectacles you’ll ever see. 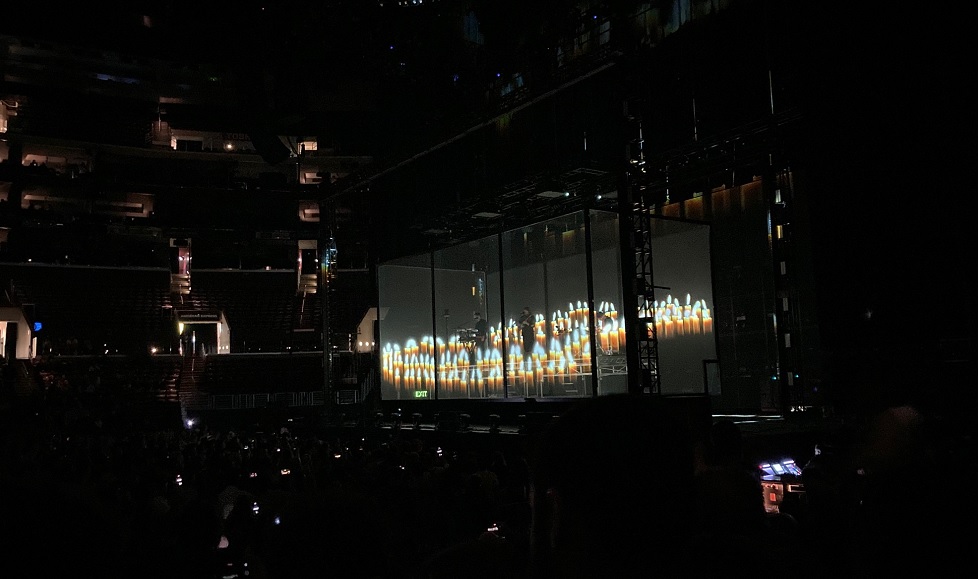 On a raised platform positioned inside a huge box frame, the trio — Joe Newman, Thom Sonny Green and Gus Unger-Hamilton — played their songs from high up in the air while projected images flashed around on the box. This gave everything a psychedelic feel, especially when it seemed the entire box was filling with water as the band played, eventually totally submerged in this (fake) ocean setting.

It was a stunning complement to Alt-J’s music, an atmospheric mix of tense energy looping vocal effects. In all, eight songs from An Awesome Wave were performed, with seven more coming from the group’s new album, The Dream. (Full set list here). 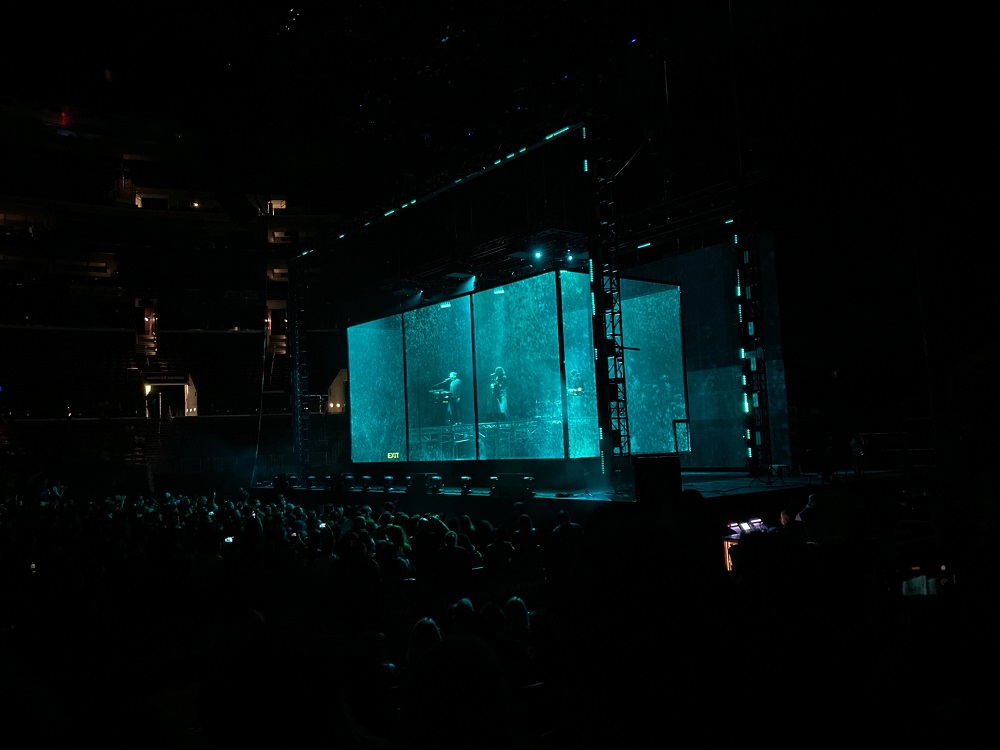 With this enthralling visual stimulation going on in front of the audience, which wasn’t quite a sold-out arena crowd but was mostly filling the seats around the venue, it was noteworthy that there wasn’t really the typical cascade of phone screens shoved up in the air throughout Alt-J’s set.

Instead, the crowd was just mesmerized, getting fully immersed in the spectacle in front of it. This continued for the entirety of the set until the encore, when Unger-Hamilton dedicated the final three songs to the memory of Taylor Hawkins, the Foo Fighters drummer who shockingly passed away on Friday at age 50 on tour in Colombia, as well as the people of Ukraine.

After the final song, “Breezeblocks,” Foo Fighters’ “My Hero” blasted through the venue as a final homage to Hawkins and his legacy.

“A huge, huge loss for music,” said @alt_J after dedicating its encore Sunday night in memory of Taylor Hawkins. pic.twitter.com/mfLEwuAu2o

This Alt-J and Portugal. the Man tour began in late February and continues until mid-April. If either group has ever piqued your interest, don’t hesitate to check out a show if one is coming to your town — both bands put on masterful performances that more than back their shared status as major forces in the scene today.