Home / Turn Me On: Alice Howe

Turn Me On: Alice Howe 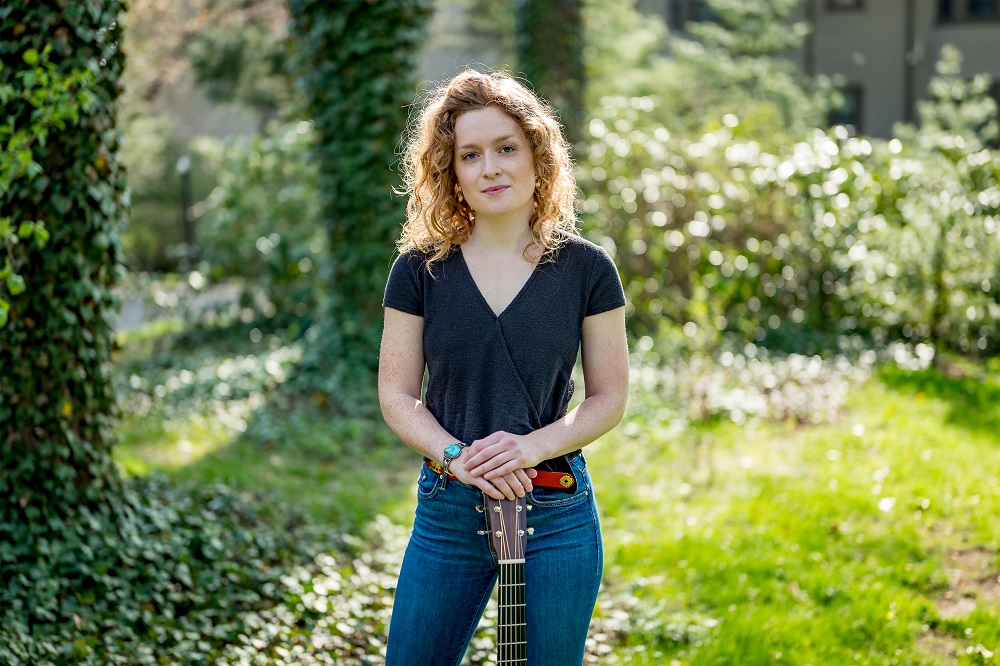 For his latest Turn Me On column entry, Jackson Truax shines a light on singer/songwriter Alice Howe …

Alice Howe’s debut album, Visions, is at once a finely-crafted opening statement and beautifully rustic Americana treasure. Howe’s artistry is itself an expression of loving reverence to her greatest influences including Joan Baez, Joni Mitchell and Bonnie Raitt. While Visions fits comfortably in the traditions of their best albums, Howe has extensively developed her own voice as both a singer and a songwriter. Therein lies the triumph of Visions, in which Howe presents something both entirely familiar as well as infinitely fresh.

On Visions, Howe offers an even split between original songs and reinterpreted gems, just as she includes equal amounts of selections rooted in the Irish/Scottish/English traditions most colloquially associated with American “folk” music, along with numbers where Howe gets to showcase her abilities as a singer of spirituals, soul, and rhythm and blues music.

Howe recently spoke with Rock Cellar over the phone about her writing process, artistic evolution and making Visions. As we discussed how the emotional and lyrical themes of the album took shape, Howe quickly offered me a deep dive into the lead-off song on the album, which provided a revealing look into her writing process: “‘Twilight’ is the first song that I began writing for the record. I was on vacation with my mom in Florida. It was actually kind of her trip with her friends. So I was off on my own quite a bit. Which worked out fine for me. Because my favorite place to write is just outside in a beautiful place. So here I am on the beach. Just kind of walking along and singing to myself which is what I like to do.”

Howe continued, “This song really says a lot about my love of finding solitude and stillness. And that being a creative place for me. It speaks to this turning point in my life, where I went from always loving music and feeling like that was my passion to thinking, ‘How do I make my life about music? How do I become a professional?’ ‘Twilight’ is that moment of questioning and thinking ‘I have some doubt but I’m going to go for it. I’m going to do it.’ It’s a song that really describes my journey. And because the album is my debut, my introduction, it felt really appropriate to start this album with this song that says so much about who I am and my journey to get to this point.”

Prior to devoting her life to music, Howe graduated Phi Beta Kappa from Smith College where she majored in Medieval European History and sang with an a cappella group. Upon graduating, Howe moved to Seattle for three years where she recorded her EP, You’ve Been Away So Long.

After moving back to her native Boston to become more deeply immersed in the Northeast music community, Howe began attending Folk Alliance conferences where she met Freebo, the singer-songwriter, bassist and producer best-known for his work with Bonnie Raitt and Maria Muldaur.

After Howe and Freebo realized they enjoyed both personal and artistic rapport, they began conceptualizing Visions with Freebo serving as producer and co-writer in addition to harmony singer and house bassist. “How Freebo framed it to me,” Howe remembered, “‘This is people’s introduction to you as an artist. How do you want to introduce yourself?’ With that in mind, we co-wrote four out of the five originals on the album. We were also talking about whether to do some covers, which I was really excited to do. So we were really choosing the songs one by one along the way. But it felt very natural. Freebo comes from an era of music that I grew up listening to and have great respect for. So I felt like we were really aligned philosophically.”

Howe reminisced, “One of my favorite days ever in my career was the first day that the band came into the studio. Because I had never worked with a band, and honestly had never heard my songs with a rhythm section. That was completely new for me. I was really excited and also really nervous. The evening before, I was talking with Freebo about it said ‘Who are these guys? I don’t know them. Because I’ve never met any of them before. What if they don’t like my songs? What if they don’t like me?’ I was panicking at the last minute. Freebo said, ‘Look. Do you like the way I play?’ I said, ‘Yes. I do.’ He said, ‘Then you will love these guys.’ For him, they were all really trusted people that he’s worked with before. When he plays with a band, they back him up. Right away, it was really comfortable. I could tell that they were all there in service of the music and in service of the songs. It wasn’t about ego or being the best. It was just about bringing their incredible talent and doing a beautiful job and doing justice to the music. Freebo chose the right people to bring these songs to life.”

On the process of recording an album that feels intimately in the moment while also meticulously produced, Howe recounted, “Pretty much what we did for the whole record, was that I would record my guitar part first with a click track. Then I would sing live with the band. Because I did want to play guitar on every song. And then I would be able to sing live. It has a really live feel. There were some overdubs. But mostly it’s all what happened in the moment. Because that was a really important part of what makes the record sound so real and warm and immediate. Freebo had the sense to say that he thought it would be really powerful if I could sing with the band live. And it was. Because their energy was infectious. I think that energy comes from my singing live with them.”

“You Just Never Know”, co-written by Howe and Freebo, stands out as being one of the highlights on the album, as well as the most bluegrass-tinged number on Visions. “‘You Just Never Know’ started as my road song,” Howe mused. “Because so many musicians talk about the road. It’s kind of a cliché. But for good reason. Because it’s where we spend a lot of time. We always joke that the work is getting to the gig. Like the gig itself is pure pleasure. But you’ve got to drive there and schlep all of your stuff out of the car. I was on this particular highway that goes from Boston to Western Massachusetts where I went to school. It actually goes all the way out to Seattle where I lived for a few years. Going west on Route 90 is this very familiar, evocative place for me where all of the exits start to remind me of people and different times in my life. That was the idea for the song.”

Of writing it with Freebo, Howe continued, “I had never co-written a song before this album. I was always private and kind of guarded about that process. It’s just felt really personal to me. Freebo had to wear me down. After a little while, I said, ‘Okay, I’ll share some unfinished stuff with you.’ ‘Twilight’ and this song I took to him. I had a lot of lyrics. I had an idea for the melody in a lot of cases. He really helped me dial it in as far as editing it down lyrically. He has a lot of great musical ideas. I decided that I really wanted my friend, Jeff Fielder, who played on my EP to come and play on several songs on this record. He actually played slide guitar ‘Still On My Mind.’ He played electric on ‘Twilight.’ He played dobro on this tune. If you listen to my EP, the song ‘Homeland Blues’ also has Jeff playing dobro. Because I just love the way he plays that instrument. I honestly was just looking for an excuse to incorporate that. Freebo and I were at the Folk Alliance conference and met this wonderful mandolin player named Geoff Goodhue. He ended up being out in California for another reason. We brought him into the studio, too. It kind of took on this bluegrass vibe by accident. But it works so well that obviously we stuck with it.”

Howe plans on releasing her first two music videos in the coming weeks, beginning most imminently with “What We Got Is Gold,” the one song on Visions entirely written by Howe. In anticipation of the video’s release, Howe previewed, “The song is obviously a really intimate and personal love song. For the video, I just happened to meet this wonderful videographer named Jim Shea. He has worked with a ton of artists. He’s been shooting album covers and doing music videos since the 1970s. I basically gave him the album and I said, ‘Jim, what do you want to do? What song should we do?’ I didn’t have any concept in mind. He said, ‘Let’s do a really intimate performance study of you singing ‘What We Got Is Gold.’ So that’s what we did. It’s really just me performing the song right up close. It’s actually one long take. It’s really intimate. I’m really proud of how it turned out. I can’t wait for you to see it.”

Howe recently moved across the country again, this time to LA, where she’ll be playing at Genghis Cohen on October 18th before a run of East Coast dates in November and then hopefully returning to Europe in 2020. Of her latest relocation, Howe shared, “I felt that it was time. Life comes in chapters. I had the Boston chapter. That felt like a really perfect place for me to begin moving out into the world as a professional musician. My family’s in Boston. So it was a good place for me to get started. I felt, especially after recording this record, I was really hungry to explore and take my music beyond just my hometown and where I’m from. Beyond that, I just met so many wonderful people that live in LA. And so many creative people who are really driven and who are really hustling to do their best work.”

To turn yourself on to Alice Howe go to AliceHowe.com to listen to and buy Alice’s music on various formats as well as sign up for Alice’s monthly newsletter. Alice frequently updates her Facebook and Instagram @alicehowemusic.