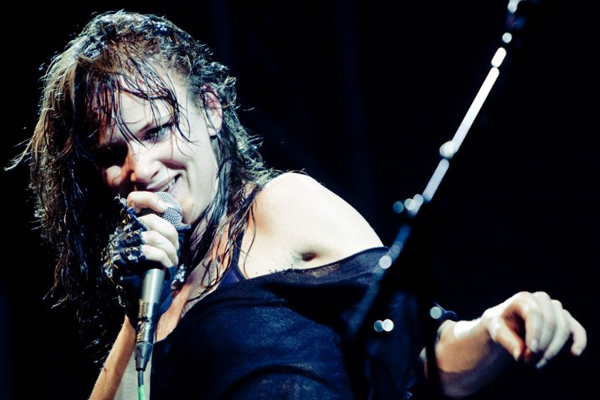 In the song Hard Lovin’ Woman, Juliette Lewis belts out: “You better look around and get a hold of yourself, woman, and embrace what you’ve become.” 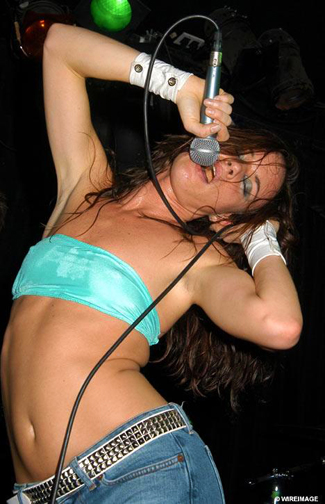 Lewis’ work in such films as Cape Fear, Kalifornia and Natural Born Killers made her famous — arguably more famous than her father, character actor Geoffrey Lewis.

Currently starring in NBC’s new drama series The Firm, Lewis is taking a break from touring with her band. But just before filming began in Toronto, Rock Cellar Magazine tracked down the multi-talented Juliette Lewis to chat about her music, her father, and the rock influences that helped shape her fiery bad-girl persona. 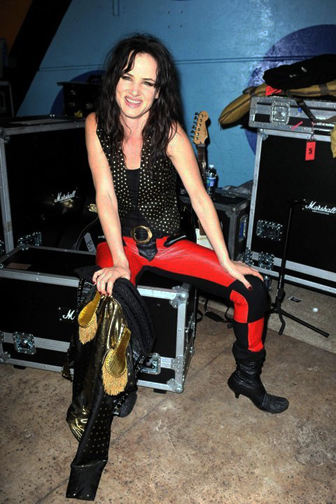 Rock Cellar Magazine: How does the creative process of writing music compare to acting in film and television?
Juliette Lewis: For me, writing music is a really vulnerable process, but like acting, it’s a journey that involves exposing and challenging myself as I strive to go deeper and be more honest. The title of my latest CD is Terra Incognita, which means unexplored territory, because that’s where I wanted to go as a songwriter, emotionally and sonically.

RCM: Terra Incognita has a distinctly different sound and is more diverse than your previous three albums (under the name Juliette and the Licks) but it still roars.
JL:  Oh yeah, The Licks were like what I call straight up and down muscular rock and roll, and it was all about the guitar riffs. And with Terra Incognita, I wanted to challenge myself in a different way and make this psychedelic, haunting, full-bodied smorgasbord of love with the spirit of rock and roll, blues, and pizzazz. Like I said, it was fresh territory for me but I’m really proud of it, and I just love the big ol’ earthy feel to it.  There’s songs on there about disillusionment and hope, and the duality and contradictions all human beings have.

RCM: One of the most soulful and gritty songs on the album is the track Hard Lovin’ Woman.  What was the inspiration for that song?
JL:  I wanted to write a blues song for years, but with the blues you got to be connected and feeling it. Then one day I came up with this line, “I’m a hard lovin’ woman’ — that was sort of like this declaration.  My friend and bandmate Chris (Watson) played me this blues riff and I told him to keep playing it, and the song virtually wrote itself because it was aching, needing, dying to come out, like this guttural purging thing. It’s one of the most meaningful songs to pour out of me.

And performing that song live, it’s always the turning point at every show where the audience just goes, ‘Holy fuck!’ because it’s just pure raw, unfiltered emotion. T hat song needed to be written for years, and along with Suicide Dive Bombers, it’s one of the closest songs to my heart and I think the audience can feel that. That song is as much ‘me’ as any song I’ve ever written.

RCM: Suicide Dive Bombers is pretty atmospheric and dreamy.
JL:  There’s a line in that song I wrote when I was 21 — it’s amazing what your mind can retain — and it was something like, ‘You were selling tickets at my funeral.’  It’s about fame and how people knock you when you’re down or sort of bleed you when you’re in a hard place. I love performing that song also, ’cause it’s the live show where it all really happens.

RCM: Your concerts are a nice mix of older and newer songs, along with some surprises — like your cover of Iggy Pop’s No Fun. How do you go about putting a setlist together?
JL: Oh man, playing my latest album live is like fuckin’ algebra and setlists to me are like quantum physics, because you have to predict what your audience is going to be feeling. It’s all about their energy and what they’re going to be giving back, so I have to go digging into what people are going to be into and what they want to hear. 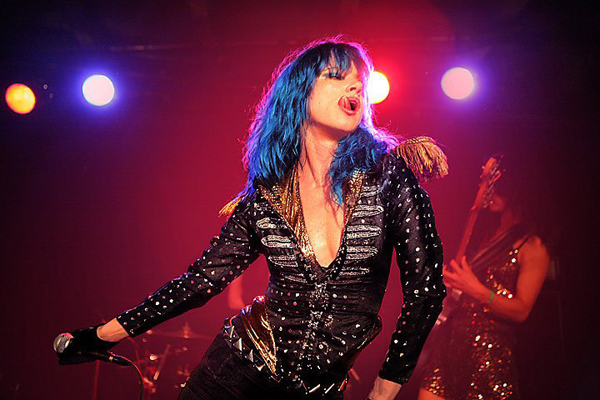 I also like to try out new songs that I just wrote, in front of an audience. I did that on the last tour. As well, I get bored easily, I don’t like repetition, so I like to keep things fresh and I also like the sense of danger when performing live.

RCM: Did you feel a sense of danger when you first ventured into the music business a decade ago, after already establishing yourself in Hollywood?
JL:  Definitely! The reason I didn’t start singing early on is because I was way too critical of myself. I was critical of my acting early on too, but I had enough sense just to do it.  But with my singing, I was even more brutal. I just had these high ambitions, but I remember thinking how I could never sing like Mavis Staples or Tina Turner, so I was like, ‘Why fucking do it at all, then!’  But since then, I’ve found my own strength in my singing and come into my own.  And I’ve fuckin’ worked for it, y’know. I hustle.

RCM: You never tried starting up a band as a teenager?
JL: No, because I was acting, but I think even back then I had this hungry need to write songs and perform live. And then as I was getting older I thought, ‘Fuck, you better start now before you end up looking back with regret, never having tried music.’ So that’s when I decided to embark on this journey of self exploration in songwriting, because I always felt there was this deep aching in my heart.

RCM: Music is in your genes, right?
JL: Yeah, my father was a drummer and also played keyboards in our living room when I was growing up. He always talked to me about drumming, and that’s why I have this affection for drumming. But if anything, he’s just really validating — both my parents are, really — of anything artistic. 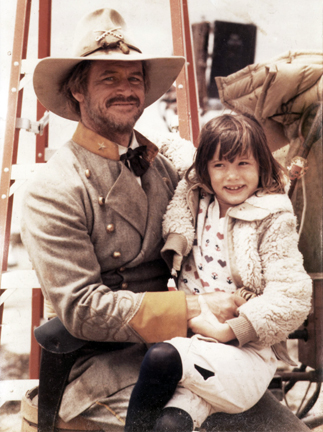 Geoffrey Lewis and his daughter Juliette

RCM: In 1973, the year you were born, your father made the great Western film High Plains Drifter with Clint Eastwood. His rugged looks always make for a powerful screen presence in everything he does. More recent, he’s especially mesmerizing in his those musical/storytelling performances with Celestial Navigations, which he founded.
JL: Oh yeah! My dad’s this total Renaissance man and even took dance in New York. And he was a big influence on the music I grew up listening to. When I was nine years old, we’d go out in his car and he’d take me to run errands, and he’d play Rickie Lee Jones, Steely Dan, and The Who.  When I was 12 I was listening to early rap and dance music, y’know, like Lisa Lisa and Cult Jam. 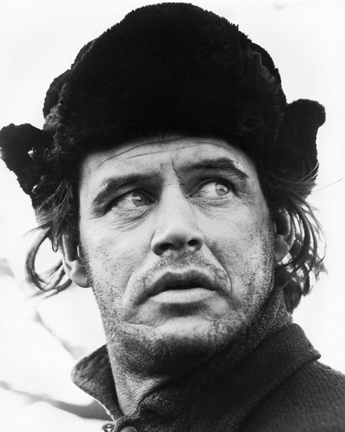 But all his musical tastes — Miles Davis, Frank Zappa, Woody Guthrie — became my tastes some years later.  He was the first one to introduce me to the music of Janis Joplin, and I remember one night her face came on the TV and he said, ‘Do you know who that is?’ and I said no, and he said, ‘That’s the first white woman of soul.’ It was only a few years later I started my own discovery of all that great ’60s music and all those amazing artists who played at Woodstock. 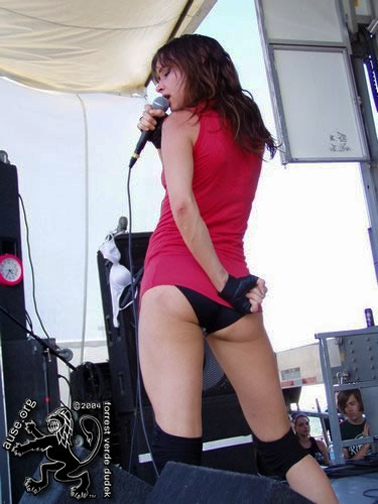 RCM: If you could put together your own outdoor music festival like Woodstock or Lollapalooza, who would you pick to join you?
JL:Wow, let me think about that! I’ve already been on tour with some bands where I pinch myself thinking, ‘Holy Shit!’ especially when we opened for Muse a few years back, and then The Pretenders. But if I were to put together a festival I’d include some amazing gals like Florence and the Machine, The Ting Tings, then add to that Loverboy and New Order. That would be pretty cool! Oh, and Peaches — she’s an amazing performer. 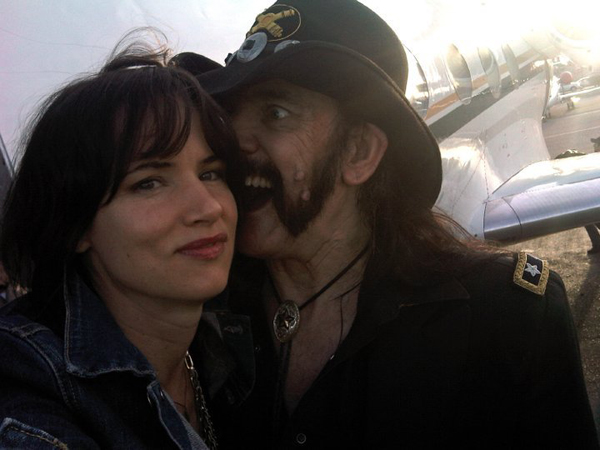 Juliette with Lemmy from Motörhead (and Hawkwind)

RCM:  What if you could go back in time?
JL: Then it would be Jimi Hendrix, Led Zeppelin, James Brown and Curtis Mayfield. That would be wild sharing a stage with them. I just love all that old rock and roll and soul music.

RCM: How about The Who?
JL: Yeah, when I first heard Roger Daltrey he blew my mind ’cause I have this affection for certain rock and roll voices and his is one of them. And what’s amazing is his voice still has the same power it did back in the ’60s.

I actually played a festival on the same stage as The Who a few years back. I was standing on the side of the stage watching them perform live — Pete Townsend doing his guitar thing — and I was shedding a tear because I was remembering how it was in my dad’s car listening to The Who. I was remembering him drumming rhythm on the steering wheel. My dad’s always been my hero and just the coolest guy I’ve ever known. My music collection is totally influenced by him. I’m so much my father’s daughter.

RCM: And, like your song declares, you’re also a hard lovin’ woman?
JL: Fuckin’ right I am! 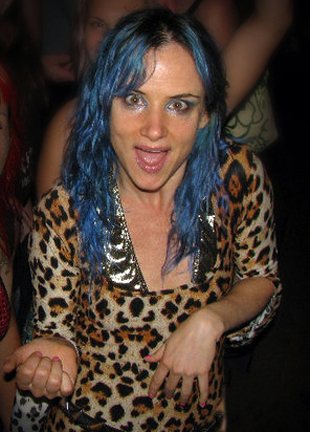 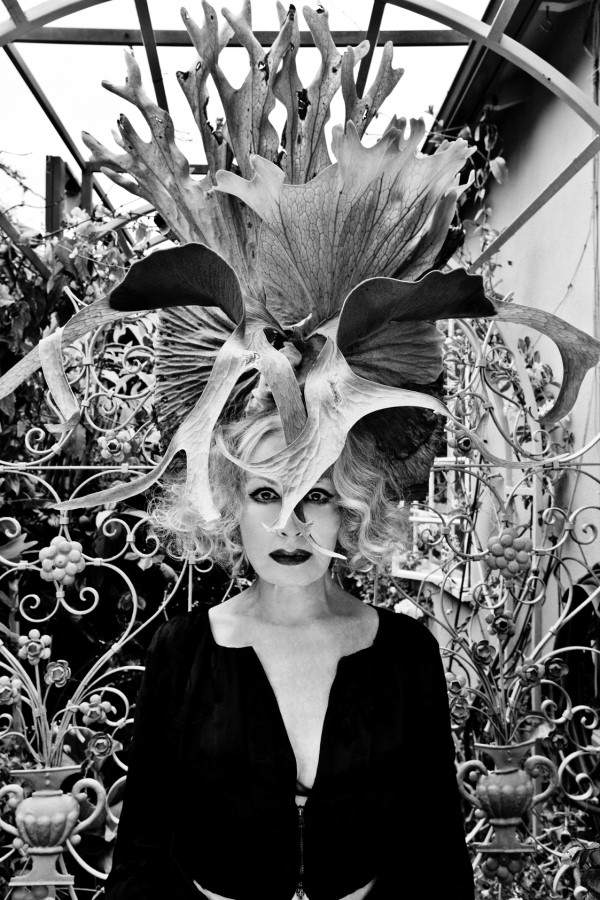 The 9 Lives of Julie ‘Catwoman’ Newmar