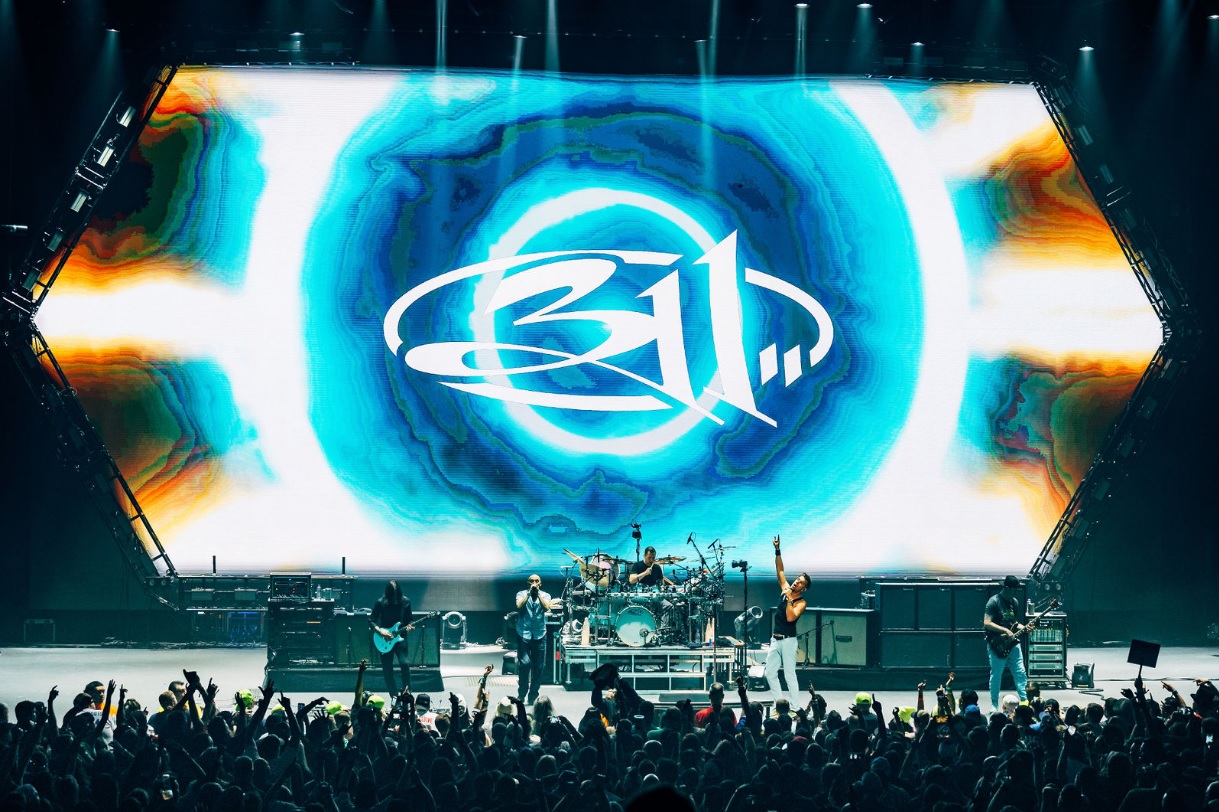 “So let everybody gather, the more the better.” The line, delivered by singer Nick Hexum on 311‘s 1995 self-titled Blue album on the song “Hive,” sums up the aesthetic of 311 Day — the band’s biannual celebration of itself and its dedicated fan base, which takes place on March 11 (or 3/11, which you’ve hopefully picked up on by now).

This past Friday, March 11 and Saturday, March 12, the band was the focus once again of another 311 Day concert experience, drawing fans from all over the world into the luxurious confines of Dolby Live, located at Park MGM in Las Vegas. 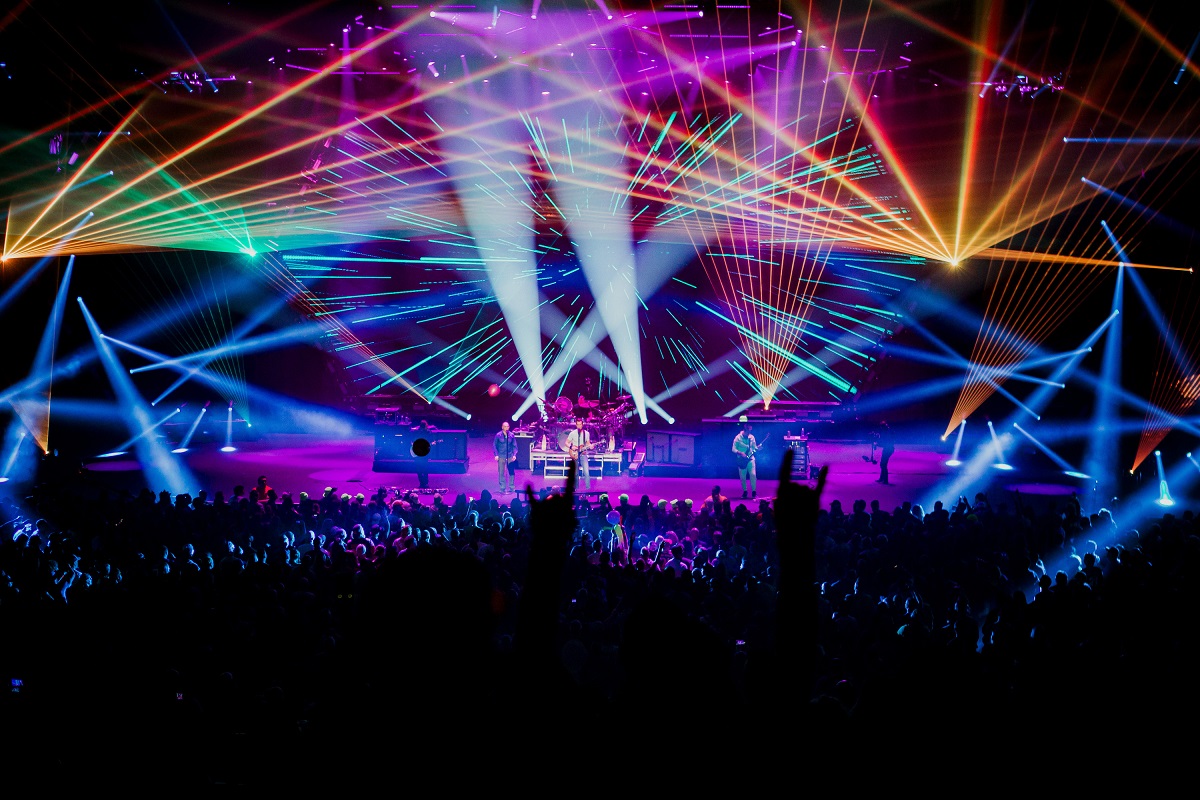 It was the perfect setting for what unfolded as another unforgettable 311 Day event, one that saw the veteran band power through 88 different songs over two nights … with no repeats.

At this stage in 311’s career, the band — Nick Hexum, vocalist/guitarist, DJ S.A. Martinez, guitarist Tim Mahoney, bassist Aaron “P-Nut” Wills and drummer Chad Sexton — maintains a steady touring schedule, at least in non-pandemic circumstances. The musicians have an onstage chemistry that is unrivaled, a kind of alchemic cohesion that only exists among friends that have played together for decades (their core lineup hasn’t changed since Fall 1990).

Since launching its 311 Day events with a show in New Orleans in 2000 with a 46-song performance, the band outdid itself in subsequent years, dusting off rarities, new cover songs, giving world premieres to new/forgotten material and leaving no stone unturned as far as set list surprises are concerned. 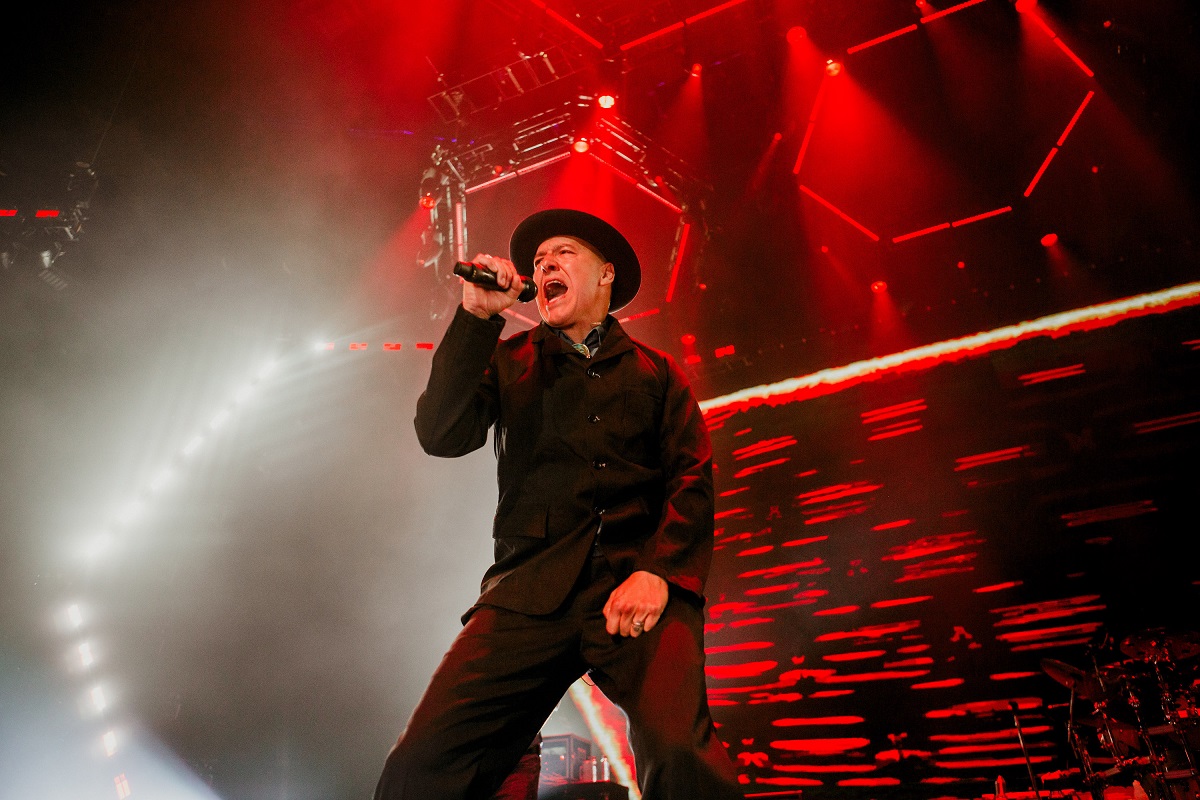 Two years ago, 103 songs were played across three epic nights at Dolby Live in Las Vegas mere days before the COVID-19 pandemic shut everything down. It was a surreal experience for those who were there that year, the world close to a prolonged period of global uncertainty that none of us saw coming.

This time, the guys rewarded the gathered masses with an inspired performance that, while not premiering any previously unheard material (or playing “Hive,” as quoted above), saw the rockers at their very best and most precise. 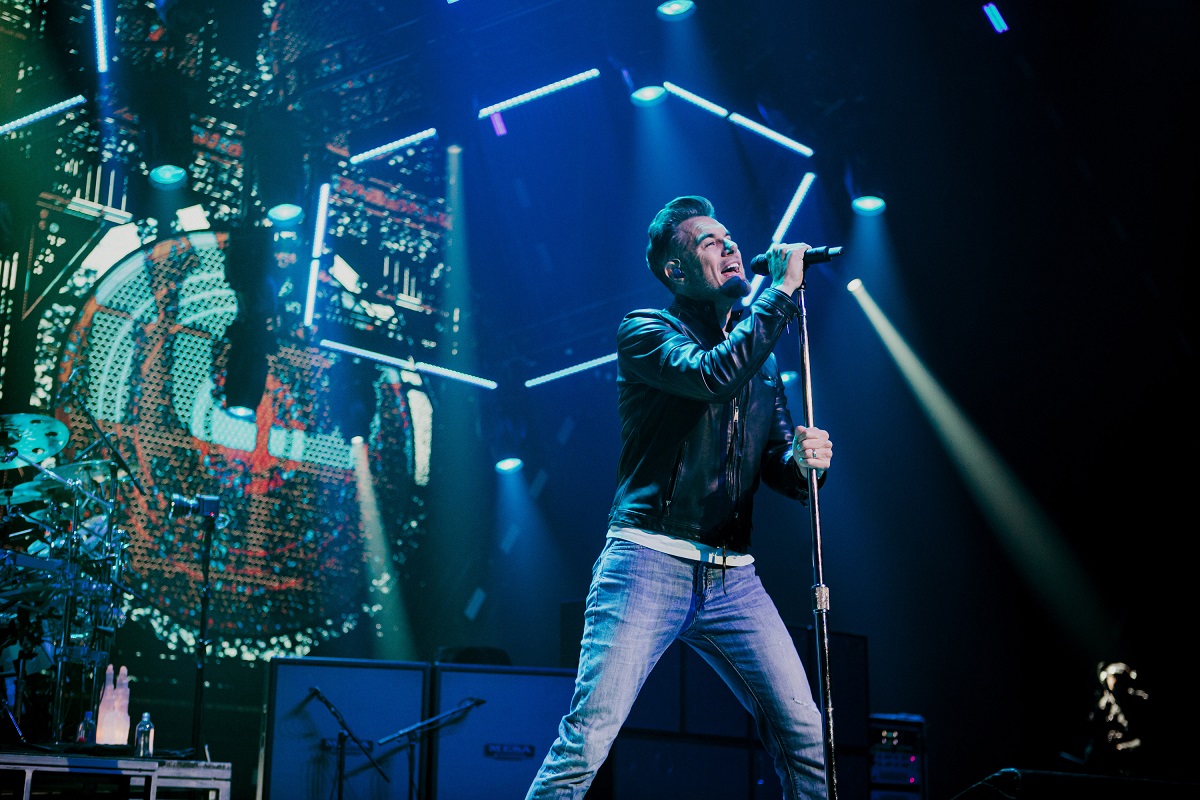 Answering fans’ calls for more songs from 2014’s Stereolithic album, a few of those overlooked tracks were played, as was some material 311 hadn’t added to its set list in years.

In terms of true surprises, Hexum dedicated a cover of John Lennon’s “Imagine” to the people of Ukraine. Similarly to how 311 infused its 2004 cover of The Cure’s “Love Song” with its own musical spirit, this rendition of “Imagine” was more than just a rote run-through:

One song, “Waiting,” from 2005’s Don’t Tread On Me, was brought back for the first time since 2006 by request of a fan who’d seen the band hundreds of times … but hadn’t as of yet experienced that one.

His request earned a shout-out from Hexum on stage, before the band launched into the track. 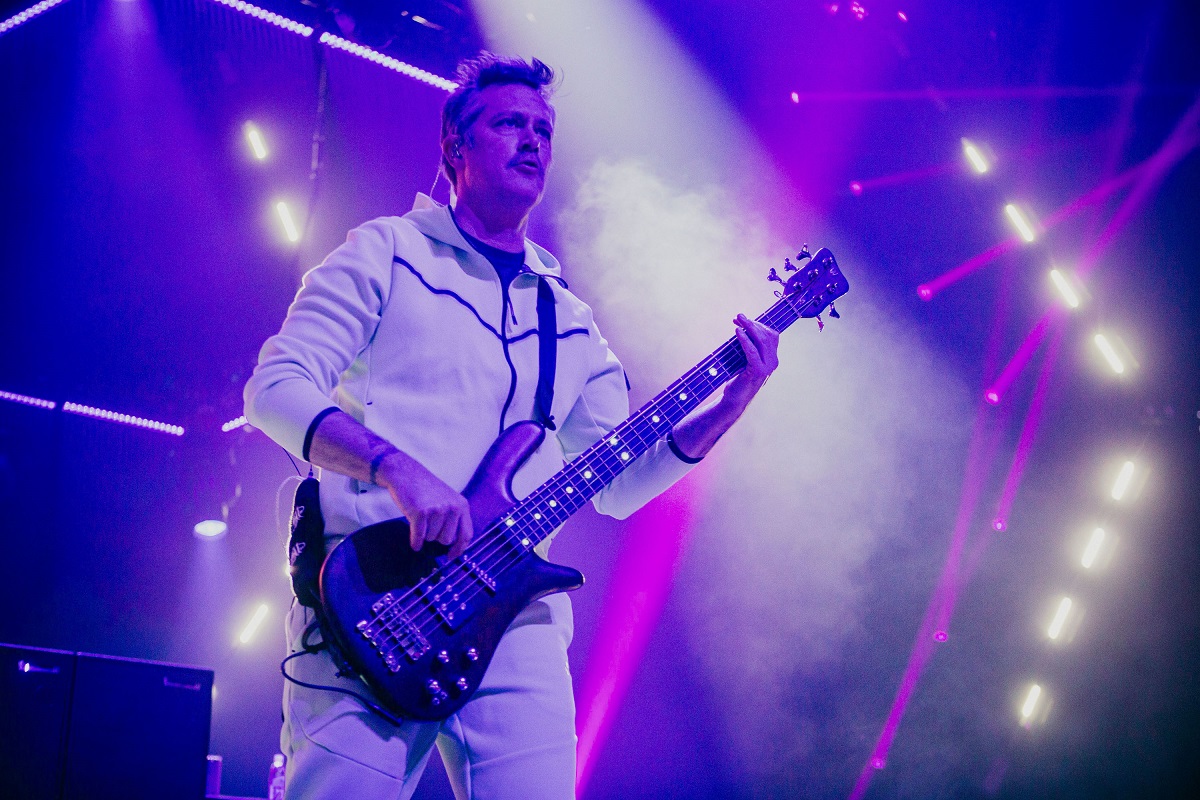 When it came time for Wills’s customary bass solo, he busted out a totally unexpected homage to the late Aaliyah and her enduring R&B classic “Try Again,” which made for a fun treat:

Ending the encore of Night 2 with “Beyond the Gray Sky,” a set list staple and a midtempo track about losing a loved one to suicide and remembering those we’ve lost, was another surprise, so much so that it didn’t really feel like the show was over after the song’s finale. It was an unusual move to end the weekend on that song in particular, but given the state of the world these days (and Hexum’s earlier reference to the people of Ukraine), it made sense thematically, at least.

That 311 is even able to play gigs like this in 2022 is a testament to its fan base, which has stuck with the band through thick and thin, through the lean years and gaps between records. It’s that feverish commitment by its audience that lands most new 311 records on the charts, without scoring a “hit song” and being released in an era far removed from the alternative rock-forward world that boosted the group in the mid-1990s in the first place.

The band reciprocates with special events like these and its biannual cruise, which Hexum announced will set sail once again in 2023 after taking 2021 off due to the pandemic.

So exhausted from last night, so thankful for your love and support #wefunk #311DAY2022

With this past weekend’s return to 311 Day in its proper form, there was a palpable sense of catharsis and jubilation throughout the venue on both nights … as well as the greater Las Vegas area in general. 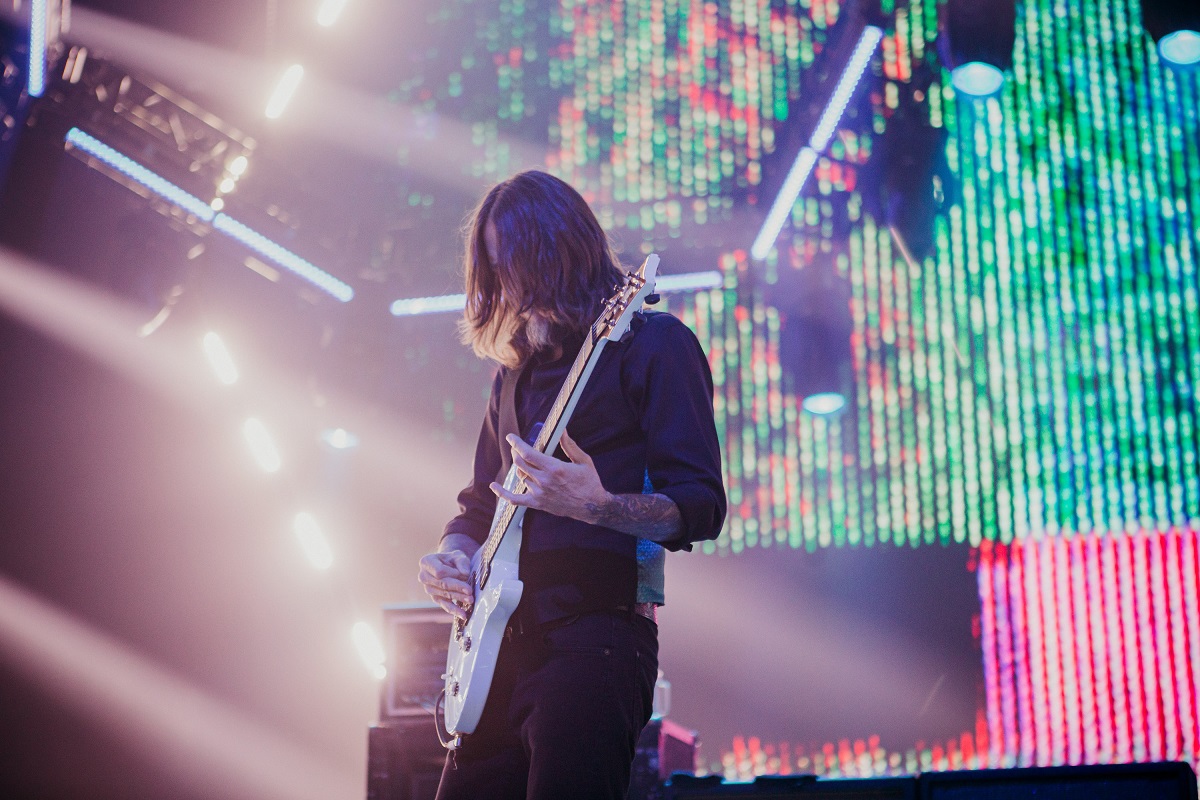 Over the years, 311 has cultivated a dedicated audience of fans that embrace the “311 lifestyle,” perhaps best explained by Hexum’s frequent parting message of “stay positive, love your life,” delivered at the end of live gigs.

Your chance to relive #311DAY2022! Deep-dive setlists of over 40 songs each night! Showtimes accommodate all time zones. https://t.co/pkqG0I2h6K pic.twitter.com/NwISVVr3RO

This “lifestyle” aesthetic is most evident in the enthusiasm displayed by 311 fans throughout the multi-day experience, whether in band apparel purchased at the merchandise table for the event or brought from home — some official and some unofficial.

The good vibes and holiday atmosphere of 311 Day also inspire some to treat it as the perfect opportunity to get married: 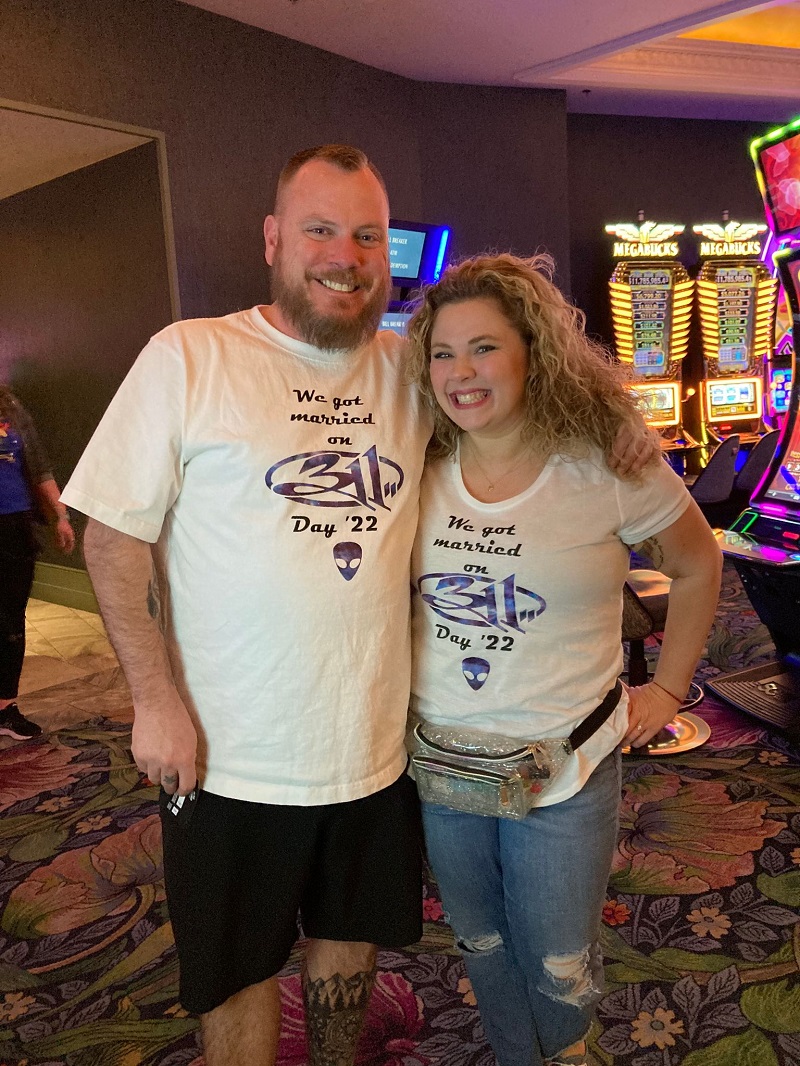 A sizable amount of fans also wear sports jerseys with ‘311’ stitched on the back, a favorite song title where the player’s surname would normally go. There were easily hundreds of fans in these sorts of outfits throughout the Park MGM area all weekend long: 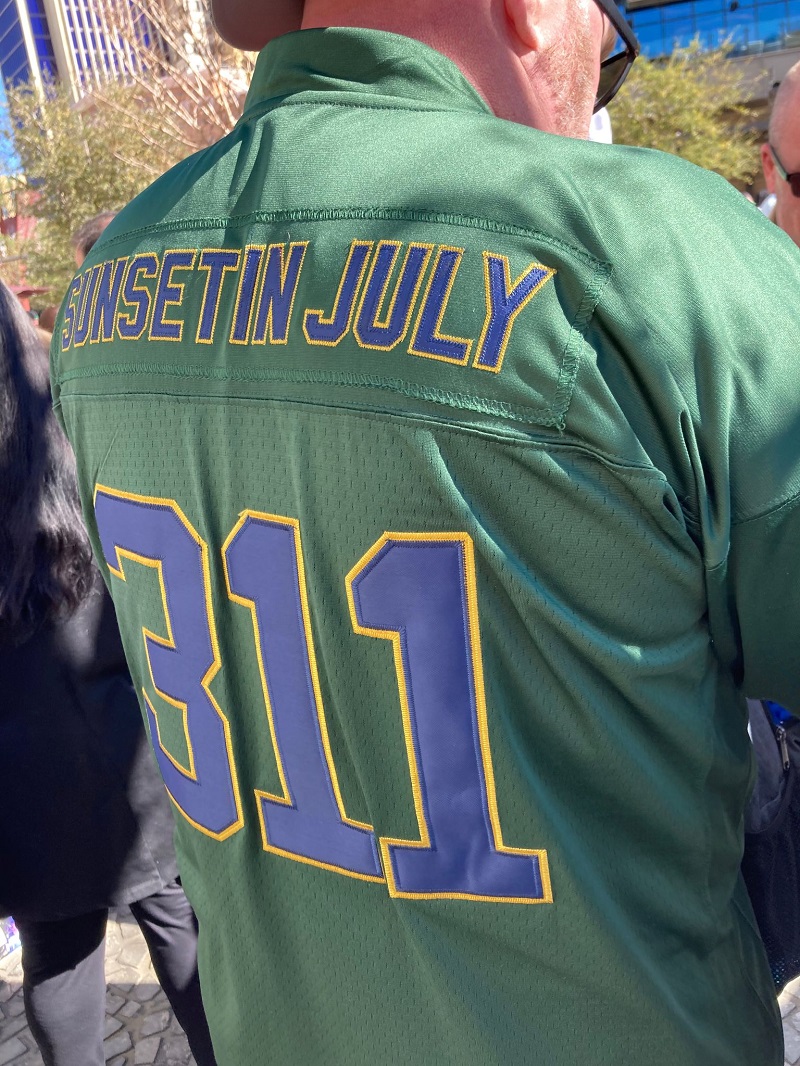 Adjacent to Park MGM, T-Mobile Arena hosted several NCAA men’s basketball games as the Pac-12 Tournament was scheduled opposite the concerts. School spirit was everywhere all the time, with the University of Arizona Wildcats the most well-represented — and that same “school spirit” applied to 311 fans.

How else to explain a makeshift marketplace for exchanging homemade wristbands, stickers, koozies and other memorabilia, a free-spirited homage to the Grateful Dead’s “Shakedown Street” that took place on Saturday at The Park, between Park MGM and T-Mobile Center?

The band extended the love to these fans both nights of 311 Day 2022, coming together to celebrate each other in a way few musical acts do. Attending the shows, one is reminded of the communal nature of music and how it brings people of all walks of life together.

We didn’t have that for a bit, thanks to the pandemic. But for one weekend in Las Vegas, 311 and its most dedicated fans put the outside world on pause and just celebrated the moment, the here and now. There’s a unique, undeniable power to that.